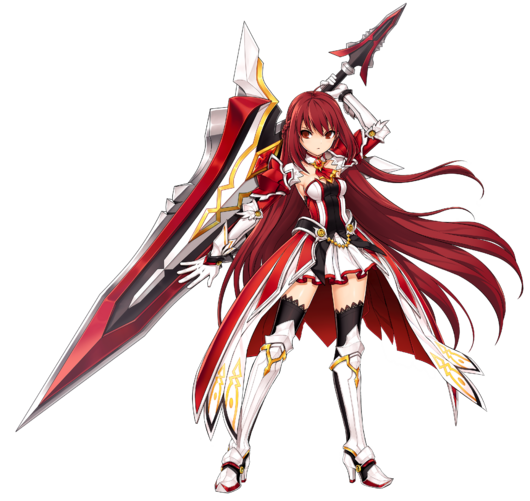 Elegant and venerated, the Grand Master is an agile and powerful warrior. Her presence is awe-inspiring, boosting the morale of her allies while instilling fear into her enemies. With an overwhelming battlefield presence and tremendous capacity for destruction, the Grand Master will lay waste to all who oppose her, giving final judgement with her almighty Sword of Relics.

Elesis continued to search for the whereabouts of Scar and the demons, all while becoming stronger by following Adel's guidance and growing continuously. During the journey, Elesis hears that Feita is under attack by the demon invasion.
She immediately rushed over only to find that Feita had already became a bloody battlefield where victory and defeat alternated on a daily basis.

Elesis realizes that to overcome this crisis, she couldn't just rely on the strength of herself, but required the strength of many; she needed a power of an organized army. Realizing this, as the Saber Knight that carries out important missions for the kingdom of Velder, she takes command of the dispatched Velder and Feita knights and begins training them.

"We will follow you in the fight against the demons, we believe that you will lead us as the grand leader of us knights, a "Grand Master"!

During the time that Elesis had spent commanding and teaching, she gets a chance to look back at the fundamental aspects of her sword skills and improves her capabilities one step further as a result.

With her powerful swordplay skills, Elesis makes a considerable contribution defeating the demons in the Feita battlefield. Her contribution becomes officially recognized by the kingdom.

Using the theme of Elesis's nickname as the "Red-Haired Knight", Elesis becomes the first leader of the 'Red Knights'. Along with the knights that she had taught, Elesis dives into the battle to retake Velder.

At Lv35, Saber Knight can advance into Grand Master. The second class advancement quest is obtained from Ariel, the event NPC located in every town.
Grand Master can also be obtained by using the Cash Shop item: Grand Master's Neck Pendent

.
Waltz of the Sword