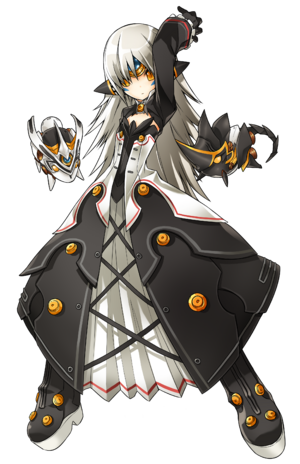 As Code Exotic, Eve becomes adept with various forms of Nasod weaponry. With weapons ranging from a rocket launcher to an explosive whip, her true power lies within her proficiency with Nasod spearing techniques. With her restricted Queen's Throne, Eve gains exceptional mobility and increased melee capability, while maintaining her sanity. The warrior Queen obtains a multitude of situational skills as she advances.

Eve continues to follow the red-haired boy, but it soon becomes a challenge. The enemies only get tougher the further she travels and she has nearly reached her limit. Eve is no combat unit and her controlled battle units, Moby and Remy, are nearing the threshold as well. A hidden code that is yet to be activated lies deep within the structure of her programming. The code 'Exotic' was used to initiate a destructive battle type unit during the ancient war. However, the war was short-lived and it was left incomplete. The risk of activating the code is high as the outcome is unknown. One day, Eve becomes desperate for power and activates the code. The queen of destruction arises.

After completing the Another Code quest chain, Eve can decide between advancing as a Code: Exotic, Code: Architecture or Code: Electra.
Code Exotic can also be obtained by using the Cash Shop item: Code: Exotic's Data

At Lv35, a Code: Exotic can advance into a Code: Nemesis.