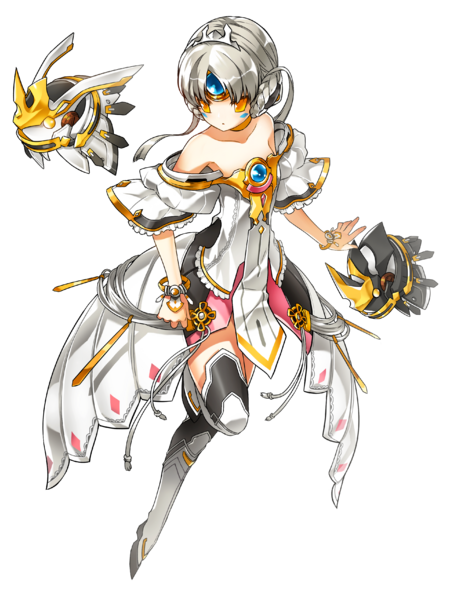 After she completed her new Nasod servant, Ophelia, Eve advanced to Code: Empress and gained a pleathora of new attacks and abilities. Ophelia, unlike Oberon, wields a variety of magical based attacks through the range of electronics she has at her disposal.

Ophelia can either launch a powerful attack from afar, or unleash a devasting attack from close range should Eve see fit. Ophelia's great variety of attack possiblities goes hand in hand with Oberon's to give Code: Empress the upperhand in any battle!

Should a battle wage long enough, Eve can summon her third and final Nasod servant, Ferdinand, with Code: Thunderbolt.

Eve started to realize she reached battle limitations with Oberon, so she decided to construct an improved Nasod Robot, named Ophelia to help Eve and Oberon in battle. Together Oberon and Ophelia combine their attacks, launching surprise attacks that leave their enemies flustered. With a throne of numerous Nasod servants, bring victory from battle as an Elegant Ruler, the Code: Empress!

At Lv35, Code: Architecture can advance into Code: Empress. The second class advancement quest is obtained from Ariel, the event NPC located in every town.
Code Empress can also be obtained by using the Cash Shop item: Empress's Tiara