For the Wind Sneaker skill by the same name, see Nature's Force. 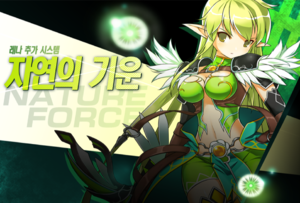 Every character in Elsword has their own set of unique features that set them apart from other characters.

Nature's Force is a system exclusive to elves. Its interface is indicated below Rena's MP bar, and the orbs are indicated in-game as NF.

How to obtain NF (Nature Orbs)

Rena is able to fill up the NF gauge by hitting targets with basic kicks, arrow commands, and Active skills. 1 NF is obtained for every 3 commands landed on a target. Even if a command deals multiple hits, it will only count as one command. For example, using

counts as three commands despite dealing up to five hits.

As the bars fill, certain graphical effects will surround Rena:

When Rena has at least one NF in her gauge, she gains a passive buff that increases Critical Chance, Critical Damage, Elemental Resistance, arrow MP gain and decreases her arrow MP usage. The effects are amplified if she possesses more NF. 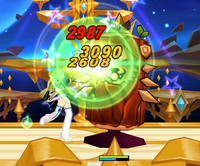 When Rena has at least one NF in her gauge, she is able to boost the damage done by commands. Most of her combos can use up one NF on the last command to deal an additional, non-flinching hit to the target. This does not apply to combos with only one command, such as

. No NF is consumed if no targets are hit by the command. Some commands can also consume multiple NF to deal multiple hits, such as Rena's

) consuming one NF for each of the 3 arrows.

NF can also be consumed by most Special Actives to trigger an additional blast on their first hit. The number of NF consumed will vary by the skill's type but the damage of the blast will increase for each NF consumed.

Currently, the only Special Actives that do not consume NF are Airelinna, Rapid Shot, Gungnir, Ace in the Hole, and Karma.