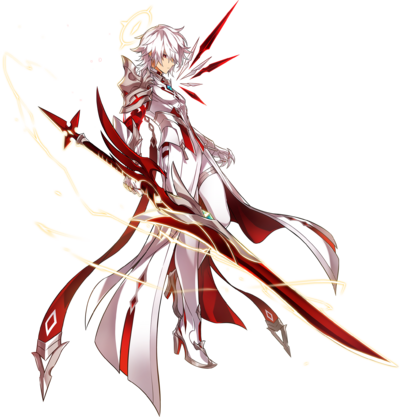 [Sword of the El, guardian of the El and Elrios]

The guardian knight who exists solely to protect the El and Elrios.

Elsword thought everything was over once he restored the El. However, when he came to his senses, he was already separated from the El and slashing through his enemies.

It was a choice he made to get rid of the one to protect the El, the world, and his friends, but it seems he still has a role to fulfill.

Elsword accepts the power and his fate bestowed by the El and becomes the guardian knight who exists solely to protect the El and the world.

"I have to protect...even if it breaks."

A guardian knight that exists only for the El and Elrios. A class that draws out the power of the source of the El and condemns all those who threaten the El and the world.

After making the easiest choice he can make, he suddenly realizes he has separated from the El despite sleeping comfortably in the Giant El. Why am I separated from the El again? Was the fate I felt inside the El a misunderstanding? If one small sacrifice couldn't end everything, then what role did he have left? Cutting down the enemy aiming for the El he finally realizes. A reason for existence. It is not possible to reject destiny and the will of the world that was set from the beginning.

"Everything is according to the El's will..."

Having fully accepted the El's power for a role that was given a long time ago, he awakens as a sword to protect the El and the world.

will change your job to Genesis.

Upon advancing to third job, you will receive a [New Power: Force] cube which contains:

You can advance into Master Class upon reaching Rigomor.

.
Sword of the El

After unlocking 3rd Job, upon reaching Rigomor, you will be able to unlock the Master Class. To receive the quest, click on the notification located below the map select.
Master Class can also be obtained by using the Cash Shop item: Mark of Awakening (Genesis)