When Eve enters Awakening Mode, Eve goes into Core Release mode and materializes the Queen's Core. The Queen's Core will follow Eve and react to help Eve by changing during offensive and defensive situations.

In Core Release mode, every successful command or Active hit or Special Active skill use will charge up the Queen's Core. Once it appears at a certain charge, you can see when it reaches the next stage when the core flashes for a brief moment as it starts to shine brighter. The higher the level of the core, the more damage will be dealt when it fires and the more times it will be able to defend Eve from attacks. 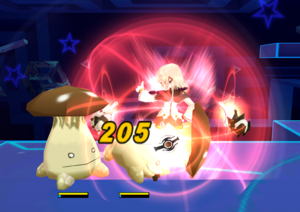 When Eve is attacked from the front on the ground while Queen's Core is active, the core will switch to defense mode and cover Eve in a shield that absorbs a portion of the damage. While the core covers Eve in the Shield, pressing

will allow Eve to phase back from the target in the same manner as Photon Flash. The core loses a level after defending. However, if you are continuously attacked, the core will only lose its level once the defending sequences stop. 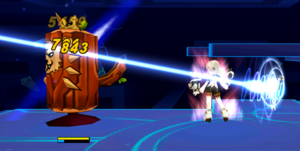 When Eve uses an Active or Special Active and hits a target, the Queen's Core switches to offense mode and fires a blue laser at a target. The laser does multiple hits and will not knock down. The laser will lock on to the nearest target and track that target until all hits are dealt. The damage of the laser done depends on the core's level.

The lasers will fire the moment the skill lands a successful hit and the target does not die on that hit. Certain skills will not cause the laser to fire immediately however. Illusion Stinger will only trigger the laser once an explosion hit connects, not when the spears do. Sonic Wave, Heaven's Fist - Sweeper, and Surface Cutting will only fire the laser at the end of the skill. Some skills will also not trigger Queen's Laser, such as Heaven's Fist - Pressure. 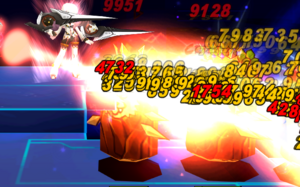