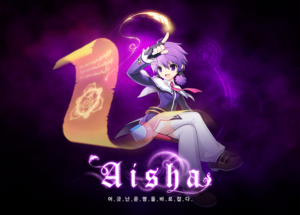 On 02/27/2014 in the Korean server, Aisha received the Memorize system, which is exclusive to her. With Memorize, certain skills can be stored in an additional skill bar, and you can trigger them later at any time.

Once Aisha enters her mana regeneration state by staying idle for half a second, waiting a bit more allows her to enter her Memorize stance. A magic note icon will appear above her head and the skills that are able to be memorized will be highlighted.

To memorize a skill from your skill slots into the memorized skill slots, you need to press its respective skill key once. Upon doing so its cooldown will be activated and its MP will be used, but the skill itself will not be cast. Successful memorizing is indicated with an animation of the note above Aisha's head becoming bigger. You are able to memorize a maximum of three skills.

In order to use your memorized skills, you must activate them via the special action key ([V] by default). It will cast the first skill you stored, at no MP cost and without triggering its cooldown. Skills are memorized in a set order that you cannot change, so be aware of the order you memorize them in.