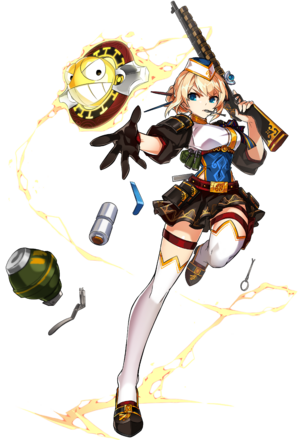 [An angel that uses elemental bullets and nitro motor to control the battlefield.]

An angel of the battle who covers the battlefield with explosions.

Rose, who was not used to battle in Elrios, endured because of her loyalty to the Princess.

In order to get herself used to various battle environments, she decided to give her ammunition various attributes.

Those who have seen her various explosive as well as her mobility using the Nitro motor, decided to call her the angel of battle.

will change your job to Valkyrie.

Upon reaching Lv. 35, a Valkyrie can job advance to a Freyja.