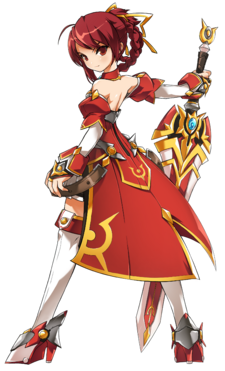 [The Knight always at the frontlines of the battlefield.]

The Knight always at the frontlines of the battlefield.

Elesis needed to be a free knight in order to seek demons.

She is acknowledged by the Royal Guards for her skill and becomes a Saber Knight.

With the support from Velder Kingdom, Elesis begins her journey to seek out demons' trace.

will change your job to Saber Knight.

Upon reaching Lv. 35, a Saber Knight can advance into a Grand Master.