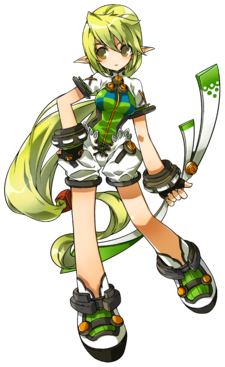 [A ranger that focuses on close combat and kicks]

She blocks enemy movements with long-ranged attacks, then destroys them with elegantly delivered kicks.

Although the elves are known to use bows and magic well, they also hone their close-combat skills as an elf warrior. And the warriors who honed these fighting skills harder than bows appeared.

Called Combat Rangers, they use a martial art that blocks the opponent's movement with a ranged attack and repels the enemy with elegant movements. If you take it easy with only using a bow, you will experience a warrior's kick that sticks heavily after a while.

will change your job to Combat Ranger.

Upon reaching Lv. 35, a Combat Ranger can advance into a Wind Sneaker.