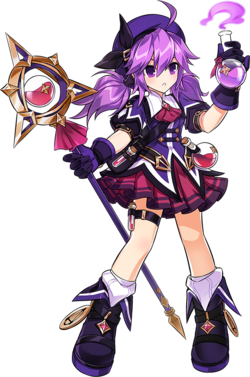 [A job that uses mysterious alchemy and magic]

Combine mysterious alchemy and magic and utilize them in battle.

Aisha, who had lost all the magical powers in her ring, felt a great sense of loss, but she did not despair or panic.

Aisha's interest in alchemy began in the village of Bethma- wherein she learned to shake off the misconceptions she once held towards the art with her unique self-confidence and spirit of inquiry.

She was a field that she had not paid much attention to before, but the more she knew, the more she could immerse herself in her infinite potential for development. Moreover, a connection with ancient magic, now forgotten... Aisha gradually found her fascination with alchemy.

"Alchemy...chemestry..and this technique...if you combine it with magic, then maybe..

We might be able to reach a point of creating a new form of life!"

With a burning passion for learning, Aisha begins to put her time into her alchemy research.

Upon reaching Lv. 35, a Wiz Magician/zh-hans can job advance to a Mystic Alchemist.