The Guild Farm is a system exclusive to guilds, which allows you to plant and harvest produce in order to craft special consumable items. 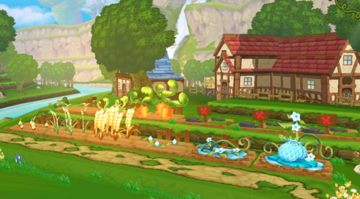 The Guild Farm with various crops being grown.

The Guild Farm system is a feature that allows members of guilds to plant and harvest their own crops at farming fields within the guild base area. Every guild comes with a guild farm by default, which can be accessed by walking outside of the guild house by going through the door to the right of Myu. From there you and your guildmates can plant and grow crops, which can be harvested into produce, which can further be cooked into Guild Food.

Every guild member can grow one crop each by default, which can be fertilized by the player, or watered by other players within your guild. The number of fields you can plant in can be expanded by the Guild Master, or a guild member with authority by using Field Expansion Tickets. The Guild Farm system also introduces a new form of currency, Seed Exchange Tickets, which are exclusively used for purchasing seeds from Myu. These tickets can be obtained by depositing Guild Coins into the Guild Storage Chest, in order to receive the same amount of tickets in return.

In order to start farming, you first need some seeds to plant. You can obtain an Elder Wheat Seed for free from Myu during the introductory Life of a Farmer quests. More seeds can be obtained by purchasing them from Myu's shop using Seed Exchange Tickets. Once you have your seeds, head to the outside portion of the Guild Base to the farm. Select a field and right-click the seed in your inventory to select it, then press Plant Seed to plant it.

Once you've planted the seed, it will take some time to grow, which varies from seed to seed. A timer will be displayed on the menu to show how long until your crops are ready for harvest. While your seeds are growing, you can have their base harvest increased by using fertilizer, and by having guild mates water your crops. You may also water your guild mates' crops in order to help increase their harvest, and in turn you will receive 10% of their harvest. You cannot water or fertilize a crop that has already been previously done so by you, or a fellow guild mate. After watering, a cooldown of 1 hour will be activated before you can water more crops. A harvest can be increased by up to 50%.

At any point during the growing process, you can click the

shovel icon in the farming menu to cancel it. Once the seeds have fully grown, you can harvest them to receive a set amount of produce. The produce harvested can then be used as consumables, however on their own, they are very weak. To get the most out of your produce, you can cook them into much higher quality consumables.

The following is a list of produce that can be harvested from their respective seeds, along with their effects and what they can be used as ingredients for.

The following is a list of Guild Foods that can be prepared. For more information about these foods and their effects, please see the Guild Food section of the Consumable page.