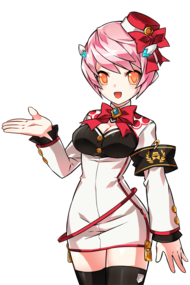 "Hello~ I'm Myu! Your guild mascot~! If you have guild coins, then I have something for you!"

A Nasod designed with overwhelmingly coquettish behavior. She's in charge of Cobo service within the Guild House.

When Ariel took Adams to his party, Myu greeted the man of the hour alongside the other COBO employees. Myu told Ariel that she should've called her for additional help. Ariel mutters to herself that having both Myu and Luriel helping would've only made things worse. Myu asked Ariel what she had said, but Ariel quickly sidetracked the conversation. When Ariel started ranting about working for COBO, Luriel and Myu both jumped in. Myu complained about the brutal hours they all had to deal with, never even once getting back home at Six O'Clock, always having to do overtime. When Adams decided to flee the party, all the COBO employees rushed to try and catch Adams so they wouldn't have to take on his workload.

"Try making delicious food with all the crops you harvest!"

In addition to her other services, Myu also sells Seedlings in exchange for Seed Exchange Tickets. These seedlings can in turn be planted in the farm area of your Guild Base in order to grow food, which can further be cooked into Guild Foods using her Cauldron option.

Custom banner patterns and blessings can be purchased from Myu using Guild Coins. Upon purchasing, they can be accessed at any time through her Banner Storage option, which will allow you to modify your banner.