Difference between revisions of "Rena/ko"

Rena is a marksman with ranged weapons but can call on the elements to fuel her magic attacks as well. When cornered though, she has no problem striking enemies with her awesome kicks. She also has the ability to seemingly fly through the air with her double jump.

Main Article: Nature's Force
Rena is able to summon Nature orbs to assist her in battle. These orbs allow Rena increase combo potential and buff her mobility. In addition, Rena is able to double-jump, shoot arrows from her bow, and charge Mana.

Rena is an elf living in the mortal world. Her place in this world is jeopardized by the weakening of El, the power gems that energize everything including the connection to her home world. If this power fades the ties that bind the two planes will vanish as will Rena herself. She uses her abilities as a Ranger to protect the El and her friends. 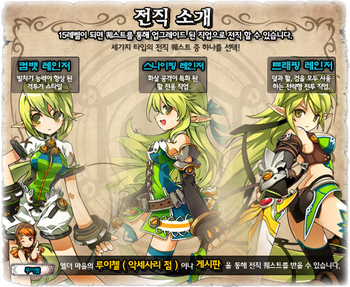 Three of the Subclasses you can choose from.

After completing the Ranger quest chain, Rena can decide between advancing as Sniping Ranger, Combat Ranger or Trapping Ranger.

Click job names below to see what must be done after advancing to Ranger.
Sniping Ranger Combat Ranger Trapping Ranger

As Rena's arrows require MP, Rena can also regenerate 5 MP/second by standing still. This is a good aspect in PvP as it helps Rena get more MP to unleash skills to support teammates. Rena's MP regeneration is half of Aisha's rate but can be sped up by Grand Archer's Nature's Sense.

If you are using a weapon with a level 3 burn, freeze, or poison attribute, the arrow will change color and appear larger. However, unlike every other character, her kicks and Trapping Ranger's Erendil have no outline or show of motion when attacking.