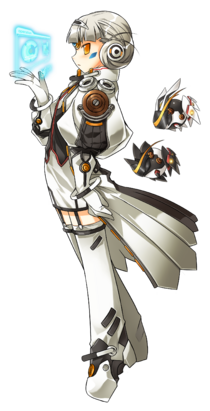 [A Nasod Queen that has unlocked the reproducing code, Architecture]

In addition to the effects of Code: Recovery, Attention allows you to assemble all of your summoned units, as well as decrease the MP cost of summoning when you have no active units.

The Queen of Nasod, ordering Nasods of her own creation.

No longer able to research Nasods due to the destroyed energy core, Eve unlocks Code: Architecture and creates Oberon.

He may act odd due to having an incomplete AI, but he is Eve's most trusty servant who understands her loneliness.

will change your job to Code: Architecture.

Upon reaching Lv. 35, a Code: Architecture can advance into a Code: Empress.