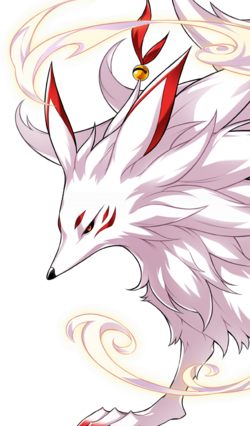 The ancient Nine-Tailed Fox, a Holy Beast sealed centuries ago in a hairpin which has been guarded by the Haan family for generations. When the family's village was under siege by the demons, Ara came in contact with the hairpin and Eun was able to unleash some of her power once more. Now the ancient spirit travels alongside Ara.

In the ancient past, Eun was a being born of the El's power, a powerful sacred creature of the land known as a Holy Beast.

Though one day 700 years prior to the present, the Haan family, in possession of some kind of foreign sealing power, were able to seal Eun inside of a hairpin. The nine-tailed fox was enraged but in her imprisoned state, she could not do anything.

Centuries passed while she could only observe the world around her. Despite being the ones who imprisoned her, Eun found her circumstances quite curious as the Haan family revered her and did much to worship and protect the Holy Beast sealed in a hairpin.

When the demons attacked Fahrmann, they eventually came upon the the village Eun was housed in, Isshin. Due to unstable ground, Ara fell into the chamber that Eun was being held in and came upon her hairpin. In that moment, Eun was able to channel some of her own power through the girl, and took over her body. The girl's hair turned white and 9 fox tails appeared. Eun, now in control of Ara's body fought off the demons and she managed to flee the village.

Some time later, Ara came to, regaining control of her body. Unsure what had happened, Eun speaks to her. Eun explains their circumstances and provide Ara with a deal, she wanted to find a way to set herself free while Ara sought to find and save her bother Aren, the two agree and travel together.

Shadow of the Silver Moon

In the aftermath of their escape, they came upon a boy named Tir. Eun was silently suspicious of the boy. Ara helps the boy defeat a monster he said was chasing him. Ara managed to fell the beast but knocks herself out of exhaustion. Tir, revealing his true colors and takes the opportunity to reclaim some of his own power which the beast had been guarding. Eun takes over Ara's body and is quick to confirm her suspicions of the boy.

Tir makes an offhand remark about a demon who'd once bragged about sealing a Holy Beast within a hairpin, something which instantly peaked Eun's interest as she demanded he tell her. Tir brushes her off as no threat, while Eun was prepared to engage him, she remembers a promise she'd made to not act without Ara and holds herself back. Tir decides to play a game with them, a simple game of hide-and-seek, Tir wagered the information Eun sought. Eun agreed to the terms, as well as the condition to not tell Ara about this bet.

When the group encounter Tir, now having revealed his true colors as the Red-Demon King Stirbargen, Eun made herself know and question who he's show himself to them. He played coy with Eun which only aggravated her. He call their prior bet off and instates a new one with the entire El Search Party.

After the group met Winster and re regales them some history of the White-Ghost Army, Laby mentions that the army had traded with the people of Elrios in the past. This details immediately peaked Eun's interest, learning of a large scale demon presence in North Fluone. She ponders the possibility that the White-Ghost King was the perpetrator, though she didn't rule out it not being so.

When Ara, Laby, and Gaia went to seek out Calonne to help operate the portal to the Demon Realm, Ara and Eun had time to talk about their situation. Ara thought about it for some time while undenounced to her, Eun was able to listen in on her thoughts. Eun begins to explain herself to Ara, she expresses that she possess great distain that unworldly forces were the responsible hand in her sealing and she sees it as a disgrace to the sacred land. She eases Ara's concern that she would strike down the White-Ghost King and laments that she is getting softer because of Ara.

After peering into the memories of the White-Ghost King, Eun begins to admit herself that the possibility of Aegirp being the demon responsibly seemed unlikely. Ara started to feel relieved about this. Nichel was curious why Ara was talking to herself. Ara explained that her situation was something along the lines of a person sharing two souls.

After Aegirp emerged, having fused with Nichel's body, Eun was certain that they were not her perpetrator. Ara was glad, but Eun couldn't help feel a tad disappointed that they were no closer to discovering the one responsible.