From Elwiki
< Ara
Jump to navigation Jump to search

Ara is a skilled martial artist that uses a spear. She is a highly versatile character, with extremely long melee attack range, as well as superior attack speed and mobility. Having an air-dash in addition to the double jump, Ara's aerial mobility rivals that of Eve, who is known for having remarkable overall movement freedom. Her range also allows her to catch enemies in her combos from a safe distance, and even hit enemies behind, above, and below her easily. Ara also has a unique trait to her different from others, as she uses "Spirit Energy" which can be used as substitution of MP.

Main Article: Eun
Ara has a special system called Spirit Energy. Ara's Awakening is similar to that of Chung's Freiturnier in that 3 awakening beads will bring on a change in appearance. In Ara's case, she gains the tails of a 9-tailed fox, and white hair. 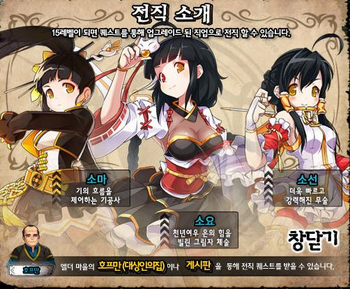 Ara is the daughter of the Haan Family, a warrior family that protected the seal of the Nine-Tailed-Fox for generations. At first glance, Ara looks like a kind and polite girl, but because of her family's influence, she is actually a highly skilled martial artist and spear wielder. Her brother, Aren Haan, began his training early and was able to become strong enough to become the Defense Captain of Fahrmann's capital. On one night, the village Ara had lived in had been attacked by an army of demons to take the village's Moon Elstone. Ara tried her best to fight back, but was outnumbered and cornered. In the destruction, Ara fell into a room containing a mysterious altar. A large hairpin that was pinned to the altar was thrown across the floor. Ara is approached by her brother, Aren, who is now Ran, the demon general who had led the invasion. Aren, who had inherited his strong spirit from the moon, had been corrupted and reborn as Ran due to the Dark El contaminating the moon's power. Ran had conquered Fahrmann's capital and led his army to retrieve the village's El-fragment.

As Ran is about to kill Ara, the last survivor, she instinctively protected herself with the hairpin on the floor. The pin unleashed a powerful light and Ara fell unconscious. When she woke, Ara found herself alone in center of the village. The nine tailed fox had possessed her and fought the demons back, but the Moon Elstone had already been taken by them. Ara then hears the spirit's voice, Eun, who had been sealed in the pin for centuries. Eun makes a contract with Ara, she will lend Ara her power and help her find her brother, Aren. In exchange, Ara has to help Eun bring back the Elstone. Ara accepts, and they go on their journey to search for Aren.

The duo arrives to Hamel after hearing of the demon invasion there, but Ara is too late and can only find traces of the demons. She quickly encounters and fights Karis, a Demon general in the Halls of Water. With the help of Eun, Ara was able to fight off Karis and escape. She eventually comes across the ElTeam who mistake her for another demon due to Ara being in her Eun form. After the misunderstanding, Elsword tells Ara that they already had fought the demons and that Ran had escaped from the Water Temple. He offers Ara to travel with him and his team, as they may come across Ran again. Ara agrees, joining in hopes of finding her brother as well as the Moon El to fulfill her contract with Eun.

Ara is required to be Lv 15 to begin her first class advancement.