Staying true to his concept of being a mechanic, Add fully utilizes his mechanized weapon; the 'Nasod Dynamo', to aid him in battle. The Dynamos are not only able deal physical damage to targets, but are also able to fire rays of electricity as a way of dealing magical damage. As a ranged alternative, his dynamos can also be configured to form a powerful electricity cannon by the same way. Add is able to manipulate the electricity the cannon fires by either using his hands or kicking to fire powerful electrical blasts. This allows his attack style to freely transition between long and close range attacks. Another aspect of Add is that some of his skills have the concept of 'Magnetism', allowing numerous homing attacks which compensates for his low HP and physical defense values.

Main Article: Dynamo Point System
Instead of a normal awakening mode, Add gets a DP awakening system. His DP system allows him to go in and out of awakening whenever he sees fit. Maintaining a balance of DP counters and the DP gauge is what makes Add different from others.

Add is a descendant of a family that researched Nasods. His entire family was exterminated after being caught researching the forbidden secrets of the Nasods. He was sold into slavery and while escaping, Add fell into an Ancient Library and became trapped alone. Fortunately, there was a steady supply of food to sustain himself as well as a large number of books about the Nasods. Add spent his time reading them and waited for the day he could escape. With his vast knowledge, Add eventually invented the Nasod Dynamo using the parts from broken down Nasods found inside the library. Using the weapon's power, he escaped from the collapsing library. However, the isolation of being trapped alone for so long left Add insane along with an obsession to find rare Nasod codes. While traveling to look for more Nasod schematics, Add finds that the race no longer exists in the world. The library where Add had lived in distorted time inside, and sent him to a timeline far into the future. Thus, Add originally sought to find a way to get back into the past. That was until he found traces of 'that person' from the corrupted Nasod King.

After completing the Tracer quest chain, Add can decide between advancing as a Psychic Tracer or an Arc Tracer.

Click job names below to see what must be done after advancing to Tracers.
Psychic Tracer Arc Tracer 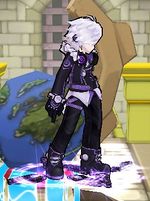