Chung’s weapon is the large cannon called the Destroyer, and his armor is the full body panoply called Freiturnier. In spite of his young and delicate looks, he can freely handle the big cannon with a tough combat style. His creed: no innocent human will get hurt under his watch.

Main Article: Freiturnier
Chung's most notable feature is his Ammo. With the Cannonball Reload System, Chung is able to maintain a stable supply of ammo to fight. He also has the ability to transform into Berserk mode.

Members of the Seiker family are known protectors of the Hamel City, the capital of the Senace Kingdom. It is to this name that Chung was born. Widely known as Prince Seiker, Chung was trained for combat from his early years. When the Senace Kingdom came under attack, Chung's father, Helputt, devoted himself to defending it. Unfortunately, the demons had possessed him, causing him to lose all control of his body, and the noble fighter unwittingly came to lead the enemies to attack Hamel. The Prince tried to stop his father, but was seriously wounded by him.
With the help of Elsword and his friends, Chung escapes the battlefield and is on the way to recovering from his wounds. Meanwhile, most parts of the Senace Kingdom are now occupied by the demons. He then decides to leave Hamel to the Red Knights and go with Elsword to train and become stronger than ever. He swears to himself that he will not use the Seiker name and will call himself Chung until he returns to save Hamel and take the Water El back from the demons. 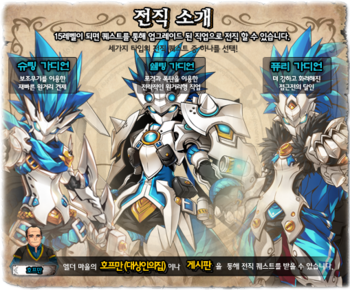 Chung is required to be Lv 15 to begin his first class advancement.

After completing the Guardian quest chain, Chung can decide between advancing as a Shooting Guardian, Fury Guardian, or Shelling Guardian.

Due to having very heavy equipment, Chung falls more quickly compared to other characters after being launched by enemy attacks.