Elesis is as fierce as she is calculated, expressing sedate attacks with her claymore onto her enemies. Although wielding a mighty claymore, Elesis herself is agile. She is able to evade and gap close with extreme effect unlike her brother Elsword, who incorporates a more defensive fighting-style. In addition to her swordplay, Elesis is capable of harnessing and expressing energy into fire, enhancing her combat effectiveness.

Main Article: Chivalry
Elesis possesses the gauge of Chivalry, similar to her younger brother Elsword's "Way of the Sword" gauge. Elesis fuels this gauge best offensively, with both basic attacks and skills. Depending on the types of attacks used to fill the gauge, a corresponding aura will activate once completely filled. Activation of the gauge will give her one of the two auras: Spirit of Annihilation or Aura of Gale. 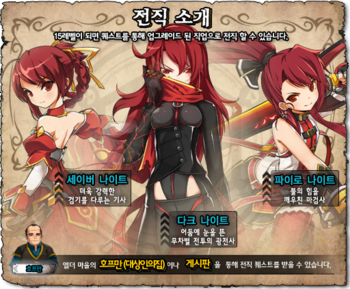 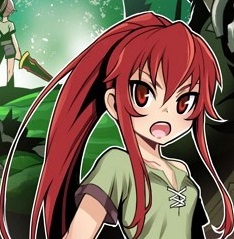 Headstrong and prone to act immediately, Elesis will do anything for her younger brother Elsword. Elesis' swordsmanship was taught by her father, a former Velder Kingdom Knight. She mastered her father's teachings quickly while integrating her own skill set. Unsatisfied with this training in Ruben, Elesis sought out to become a stronger swordswoman, thus venturing out into the world of Elrios. Three years later, Elesis returned to Ruben bearing the title "Red Haired Knight" and spent time observing Elsword's training.
However, the reunion was short-lived as the two siblings were ambushed by a horde of demons led by Scar, a Captain of the Demon Realm. A skirmish ensued, resulting in the demon horde's defeat. Elesis, with the help of her brother Elsword, dispatched Scar.
The intentions of the Demons become clear to Elesis, spurring her to leave Ruben once again. With the intent to become a Velder Kingdom Knight, Elesis will do all in her power to defend her brother, and all of Elrios from the inevitable Demon invasion.

Elesis is required to be Lv15 to begin her first class advancement.

After completing the Free Knight quest chain, Elesis can decide between advancing as a Saber Knight, Pyro Knight, or a Dark Knight.

Click job names below to see what must be done after advancing to Free Knight.
Saber Knight Pyro Knight Dark Knight