Raven excels in close combat as he uses his Nasod arm to strike down enemies with a single blow to those who dare get near him. He also uses his sword to slice up anything in his path in order to build up all sorts of combos to tear down the enemy.

Main Article: Anger of Raven
This is a system only known to Ravens. It allows him to deal heavy damage in a short time, or defend himself. After you learn to use it, it becomes indispensable to Raven's gameplay itself.

Raven is a fellow commoner from the Kingdom of Velder who rejected the idea of nobles and aristocrats. However, he was still proud of his kingdom, and thus worked hard to become the Captain of the Crow Mercenary Knights. Being a commoner in such a high-ranking position, he caused jealousy among the nobles. It was just a matter of time before he was framed and sentenced to prison. His friends, comrades, and fiancée rescued him and hid within the forest in the outskirts of Velder.

It did not take long before they were all surrounded by Velder soldiers and slaughtered one by one. Everything that Raven cared for and loved was stripped away from him, right before his very eyes. He stared at all the dead bodies around him as he slowly took what would have been his last few breaths. Just then, a Nasod figure appeared before him offered Raven a contract, for rebirth and power, he would conquer Velder and have revenge on the ones who caused his suffering, Raven agreed, then blacked out.

Raven awoke in a Nasod capsule, with devices attached to various parts of his body. Reborn with a prototype Nasod claw, he becomes the leader of the Velder Rebellion and blindly fights to destroy the kingdom he once protected. That is until he met a crew of young, ambitious heroes who reminded him of his duty to protect the people he once loved. In atonement for his sins, he decides to join Elsword and his friends on a new life adventure of finding the missing El. 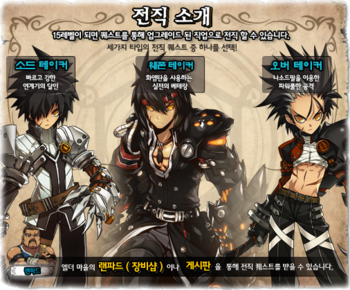 Raven is required to be Lv15 to begin his first class advancement.

After completing the Taker quest chain, Raven can decide between advancing as a Sword Taker ,Over Taker or an Weapon Taker.

Click job names below to see what must be done after advancing to Taker.
Sword Taker Over Taker Weapon Taker