In the season 3 version of Gate of Darkness, the Dark Bone Dragon is no longer there. Instead, there will be 2 towers, one for your team and one for the demons. Monsters will spawn from the demon gate and now includes 3 boss monsters. You can also summon monsters from your tower. There is however only Normal Mode for this Revamp. 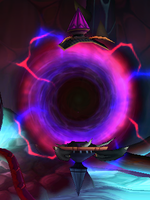 The orb of darkness that will bring you to the field

In any time of the day, after defeating a boss of any dungeon from Feita onwards, there will be a random chance where an orb of darkness will appear, sucking in your party into the Gate of Darkness field.
After the 25/4/2013 patch, when the orb of darkness is broken, there will be a pop up, asking you if you want to continue on into the Gate of Darkness as shown below. If you press yes, only those who pressed yes will go into Gate of Darkness. People who choose no will be separated from the party. You are only given 3 seconds to decide. Failing to press anything will result in you pressing yes by default.

Your objective of the new Gate of Darkness is to break down the demon's Tower. The demon's Tower have a lifespan of 20 Health bars and the structure of the Tower will break down after every 7 bars of Health taken away. The stage is completed with the Tower is totally destroyed.
NOTE THAT WHEN YOU REACH A CERTAIN RANGE NEAR THE DEMON TOWER, YOU WILL RECEIVE A SCYTHE DEBUFF WHICH WILL RAPIDLY DEPLETE YOUR HP AND MP. YOUR CHARACTER WILL BE COVERED IN PURPLE(Similar to Curse debuff) WHEN YOU RECEIVE THE SCYTHE DEBUFF. IT IS RECOMMENDED TO STAY AWAY FROM THE DEMON TOWER UNTIL THE LAST BOSS. 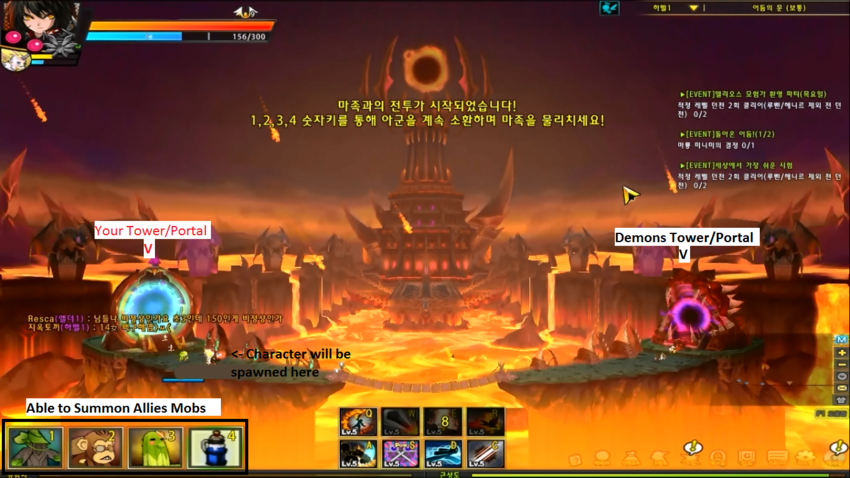 In this field, you are unable to use your own potions and food. Instead, it will be replaced with monster summoning icons.
As in the picture shown,

For bosses there are 3 types of bosses: Lv1, Lv2 and Lv3.
The sequence the bosses will spawn is after a Lv1 boss is defeated, a random Lv2 boss will spawn from the tower. This applies to both allies and demons bosses.
Each Lv has a different new attack that is different from regular dungeon bosses.
When your character is near allies bosses, you will be able to regenerate HP. (Roughly 1% per second)

The following items can only be obtained from playing in this dungeon.

While playing in this dungeon, you can obtain materials to craft the Wyvern accessories and materials to even upgrade them. These accessories can be crafted at any Accessory merchants in town. At the merchant, it will only show the basic form of the accessory. When you craft it, there's a chance of getting the Darkened version (beige-colored item name, unique version) or the regular version(purple-colored item name, elite version).

While playing in this dungeon, you can obtain materials to craft special Potions. These are powerful potions of the Ancient Gods that can grant various effects, such as increasing your damage output or give you passive abilities. These can be crafted at any Alchemist NPCs in town. Note: Season 2 potions are no longer able to be crafted.

Differences between NA and KR

When Season 3 of Gate of Darkness is released in NA server, there are a few noticeable differences from that of KR server, besides the name changes of Potions and Bosses.

Unlike KR, NA does not have a certain time period where the chances of the entering the dungeon will increase. The chances of the Portal to appear will be the same, regardless of what time or day you are playing on.

Unlike KR, there will be no consequences for not completing this dungeon for a certain amount of times.

Unlike KR, all new Wyvern Accessories and Elixirs cannot be crafted at the Alchemist or Accessory merchants. They can only be obtained from boxes called Darkness Core at a random chance. Due to the removal of the crafting service of GoD-related items, the special drops can no longer be obtained in this dungeon. Darkness Cores can be obtained by completing the dungeon or purchasing them from other players.