For the NPC page of the same person, see Penensio.

Penensio is the leader of the Red Knight army in Hamel and is a skilled Rune Slayer who can summon and combine elemental magic with his runes in order to inflict status effects on his victims and constantly pressure them. 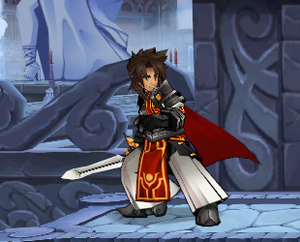 Penensio has access to all of the Rune Slayer combos.

First off, Penensio is a known runner. He will run away if you damage more than 75% of his health, and he likes to spam elemental runes so he can combo you. He loves to do the XZ loop, and often ends it with XZZ. He also tends to use Storm Blade if you are in the corner. The best way to deal with him is to mana break if he uses Storm Blade, and to catch him in the air if he tries to run away. If he uses the elemental runes, use ranged attacks if possible to hit him.

Favorite Skills: Penensio likes to use Storm Blade and Counter Attack. He also likes to use Ice Rune when his opponent is at the middle. Usually he loses because of time finish/spam.