For the NPC page of the same person, see Lowe.

The power of El was once lost then restored back to Elrios by the legendary heroes. Lowe's great-great grandfather was one of these heroes. He perfected the skill 'Mega Slash' and passed it down to his descendants. Lowe now focuses on training the new adventurers of Elrios and hopes one of them will be able to gain back the lost power of the El Stone. 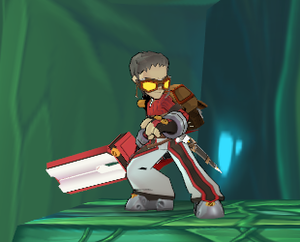 Lowe has access to all of the Lord Knight combos, but with an increased sword range.

Idealy, attack him from behind to prevent him from retaliating midcombo. Stay away from corners and keep him at the center at all times to prevent him from comboing.
If there are ledges in the map, it is recommended that you stay near the edge of them to break his combo by falling should you get caught in one.
Whenever he uses Armageddon Blade, just stay on a ledge above him and he will swipe at you from below futilely.
Lowe's attack style is rather basic, but he hits hard.