Information: This article is currently under development. Please be patient while we're adding the finishing touches!
Elsword

Elsword (Korean: 엘소드 Elsword) is a free-to-play, action-oriented massively multiplayer online role-playing game (MMORPG) developed by KOG Studios. It was first released at the end of 2007 in South Korea and later localized and made available to play in other regions. The game was originally developed as a spiritual successor to KOG Studios' other game, Grand Chase, specifically evolving the graphics from 2D to 3D. This MMORPG boasts a 2.5D side-scrolling gameplay with beat'em up combat, manga-inspired visuals, and an immersive fantasy world. The story of the game follows the title protagonist Elsword and the El Search Party as they travel across the world of Elrios to protect the El from the encroaching demonic forces.

In the land of Elrios, the world is given life thanks to the power of the El, a mystical gem that radiates energy. However, the harmony of Elrios was disrupted by one of the masters of the El, Solace, when he kidnapped the El Lady, the one chosen by the goddess Ishmael to watch over the El. This caused the El to become unstable and explode, leading to its current existence as numerous crystal shards of energy scattered across the continent. While the Nasod and human civilizations began to disappear, survivors could only prosper where larger El Shards were, as those shards hold great enough power to sustain the nature and civilization around it. Towns and villages were rebuilt around these large shards with the remaining El Masters protecting them to restore power to the El. But with the disruption came the rise of wicked beings who seek the power of the El for their own.

Our story begins with Elsword, a young boy continuing his knight training in the village of Ruben. He discovers the great, blue demon Berthe trying to take away the El Shard in Ruben, which is vital in maintaining life for the village and the surrounding forest. Elsword unleashes his anger and manages to force Berthe to retreat, with the help of the wandering magician, Aisha, who happened upon the battle. Meanwhile, the elven ranger Rena overhears a group of bandits also planning to steal Ruben's El Shard. She engages the leader, Banthus, but he is able to escape with the El Shard. Rena, Elsword, and Aisha resolve to work together to retrieve the stolen El Shard from Banthus and the bandits, thus forming the El Search Party. This would begin their adventure as the members of the El Search Party travel across the continent to track down the El, make new allies and friends, stop powerful and cunning foes, solve the mysteries surrounding the El and the El Lady, and protect Elrios from the growing evil that threatens to destroy it. 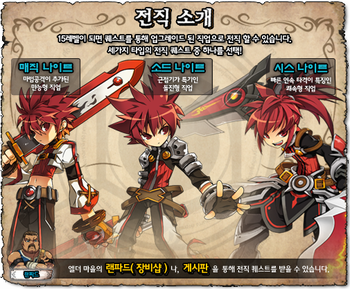 Players can choose to play as one of thirteen playable characters, each with their own unique characteristics, abilities, and backstories. Players will traverse through diverse areas and villages, where they can talk to NPCs and accept quests or access the game's various shops and facilities. Players can venture into dungeons and fields, where they can defeat enemies and tough bosses using attack commands and special skills to string together powerful combos. Doing so will allow players to complete Epic Quests, which unfold the story though dialogue cutscenes and sometimes rendered videos. Defeating monsters and completing quests can reward items, equipment, and ED, the main in-game currency. ED can be used to purchase various items, equipment, and services. The game servers also generally have limited-time in-game events that players can participate in to earn special rewards and benefits. Players can choose to use real cash currency to purchase exclusive goods from the Item Mall. Some of the main types of items available in the Item Mall are costume pieces and customizations, which can be purchased to dress up and customize characters to make them personalized.

Players earn experience from defeating enemies, clearing dungeons, and completing quests to level up and advance their characters. Upon reaching level 15, players can upgrade their character along a specialized job path, each with their own fighting style and personality, which gives access to new skills and abilities. The player is then able to advance their characters further at level 35 and unlock more powers for their class with the Transcendence system at level 70. The final advancement sits at the current level cap of level 99, unlocking the Force Skill system and more abilities, as well as granting access to the Master Class system upon progressing far enough into the story.

Upon reaching the level cap of 99 and completing a certain quest, players can continue to earn experience to earn points in the El Resonance system, which can be invested in various stat increases to specialize characters and make them even stronger.

Players can collect and use a variety of items found throughout their journey. Quests can reward items upon completions, and NPCs can sell some items to players. Dungeons and bosses can drop rare equipment and items as well. Equipment can be dismantled into materials, which can be used to craft even stronger equipment. Equipment can also be enhanced at blacksmiths to power up its main stats, socketed to give additional stats, or attributed at an alchemist to gain additional elemental effects. Special dungeons available at higher levels drop special materials and equipment that is needed to craft the strongest, endgame weapons and armor. Other items such as consumables and elixirs can be crafted as well. Players can also own pet companions who can accompany them on their journey, as well as mounts to provide swift transportation.

Players can interact with each other by communicating via the chat window, forming parties either manually, through automatic matchmaking, or with the party list, playing in the fields or dungeons together (PvE), sparring or dueling in player versus player (PvP) matches, becoming part of a guild, trading with one another and selling items on the market board, and combining forces to tackle giant Raid Bosses.

Elsword has expanded across various other mediums over the years since its release, covering many aspects of the Elsword story and universe.

Elsword saw the release of many manhwas and comics. One of the first is ElType, an official series of online magazines containing stories with the Elsword characters, gag comics, and promotional content. The first volume was released in May 2009, and the fourth volume was released in April 2010 before the series went on hiatus. ElType returned in December 2012 with the first volume Season 2, helping promote the release of Ara. The fourth and final volume of Season 2 released in June 2013. Season 3 began in July 2014, but only had 2 volumes. The second volume, released in December 2014, promoted the release of Luciel. The latest season, Season 4, has two volumes. The first came out in December 2015, which promoted Elysion and Rose. The second volume and the last in the ElType series released February 2016.

There is also a manhwa series simply named Elsword, written by Kim Eun Jong and with art done by Harim.[2] The series began with its first volume released in March 25, 2008 and continued up to Vol. 26, released in January 25, 2017. Its story seems to be loosely based on the game's story up through Sander. One notable feature of this manhwa series is its depiction of the characters and how they job-change.

KOG officially released some special promotion comics for the release of new content. The Cartoon Book series promoted various new releases, like Chung, Hamel, and Velder's Hallucination. The Transform to the Max series shared the backstory of the Transform paths of first six playable characters. The Elesis Red-Haired Swordsman comic promoted Elesis's release, while the Together with You series promoted Luciel's release.

Currently, KOG is releasing a series of voiced webtoons that explore and expand on a specific playable character and their backstory. Starting near the end of June 2016, the first series was Lu & Ciel's Tea Time, where Ciel shares with Lu how he learned to cook, and why he learned how to fight. The second series was Quantum Leap, focusing on Edward Grenore and what led him to become the troubled Add today. Next is Raven's Double Crow, exploring Raven's past and the important promise he made. Incident Log of Strongest High Magician in the World followed, featuring Aisha and the strange incident she experienced while searching for certain information. Crossroads of the Wind teaches more about Rena and her connection to the spirits, especially to one in particular. Shadow of the Silver Moon details Ara's encounter after the fall of her village with an unexpected source of information about her brother. The voiced webtoon series about Chung's resolve and glimpses of his and Helputt's past is titled Blue Dawn. The latest webcomic, CODE: REFACTORING, details Eve's initial awakening after the decline of her race and her meeting with a special individual who teaches her what it means to be the Queen of the Nasod.

In 2014, Elsword Brazil released its own webcomics series, written by Fábio Yabu.[3] It contains 13 volumes.