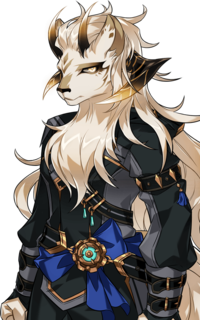 One of the Demon Realm's four most powerful lords and leader of the White-Ghost Army.

In the northwestern corner of the Demon Realm was a barren land with limited resources. Two races of beasts existed and clashed against one another, the physically strong Garen and the mentally superior Nous. They waged war until Aegirp stepped in and offered a hand to both sides and established some form of peace between the two races. Aegirp was born a mix between the two races and was often looked down upon during her early life. Adopting to take and maintain a Garen appearance so nobody would know her hybrid origin. Aegirp became a forced to be reckoned with, and town down all the rouge packs and bringing them under her allegiance. It is by the hand of Aegirp that the two races unified under a single allegiance and founded the White-Ghost Army. An idealist, Aegirp believed in the hope that they could permanently escape the cycle of war, the two races had been locked in and she acted as a symbol of hope, though filled with her own doubts, she kept the outward appearance of a strong leader and lead her people.

One day, the Demon King appeared before Aegirp. The Demon King saw her as a worthy asset to his quest for unification and extended his hand with promises of ending the cycle of conflict and hatred. She agreed to serve under him and became one of the Four Demon Lords. Aegirp and her White-Ghost Army pushed the Demon's King's ambitions and aided in his unification of the entire Demon Realm. Of the four Demon Lords, the White-Ghost Army became known for their pacifist ideology, only choosing to wage war when absolutely necessary, never embroiling themselves in unnecessary conflicts.

Though one day, the Demon King mysteriously disappeared. His disappearance left Aegirp and the other demons factions in much confusions. Worse off, the conditions in Aegirp's territory grew worse, forcing her army to relocate eastward.

Peace Between Humans and Demons

During this trying time, she had discovered an abandoned laboratory in Rigomor. In it, the White-Ghost Army discovered data about portal technology, using the research they found, the White-Ghost Army opened the portal and Aegirp stepped through. On the other side, she landed in Northern Empire where, to her surprise, she was mistake for a Holy Beast and made amicable relations with the locals. This discovery soon followed an acquisition of resource through trade with Elrios and paved the way for Aegirp's ambition to create peaceful relations between the Demon Realm and Elrios, as well as stability for her people though this trade.

During her reign, she led campaigns to try and form villages where both humans and demons could live and trade in harmony in North Fluone. Calonne, Deborah, and Gunther were among the demons who were sent to lead this campaign of peace. The army's primary export into Elrios were the Mystic Stones which could not be found in Elrios, in exchange they gained essential resources which were imported back to the Demon Realm to aid the struggling homeland.

A large amount of infighting began throughout the Demon Realm between and within the jurisdiction of the Four Demon Lords. Anticipating the tragedy, Aegirp devised a plan to preserve her soul even if her body were to be mortally injured, she scattered her soul into five pieces that she hoped her minions could piece together. Aegirp was caught off guard when she was betrayed by her subordinate Berthe who rebelled with the help of Barkat and many of the Garen once under her rule. Aegirp's loyal servants in the demon realm, mainly consisting of the Nous race, were persecuted and were forced into hiding, taking refuge in the undersea region of Rigomor. Her physical body has been killed but her soul scattered in pieces, due to most of how powerful subordinates having betrayed her, her loyal subjects lack the means of collecting the fragments of the Lord.

After Nichel successfully reached out to the Annihilator and drew out Aegirp's soul into herself, the White-Ghost King was reborn anew within the girl's body. Emerging from the mist, the first think Aegirp spoke was lamenting her own faults which had lead to Berthe seeking betrayal and now his demise. Calonne assures Aegirp she still has many allies. She then greets everybody, noting Luciela's new appearance. Winster comes wondering what became of Nichel, the lord assures that the child is safe, merely voluntarily sitting behind to allow Aegirp to relish the new world.

Haivan goes up to the revived lord, he is relieved Nichel is still there, but then demands the wraith relinquish her possession. Aegirp politely refuses his request, wishing dearly to see the world that Nichel had believed in. Aegirp catches up with Deborah and Calonne while Winster and Asella had gone to scold Haivan. She is delighted to learn that they had managed to live peacefully among humans in North Fluone and Laby jumps in to tell about Mao. Aegirp then turns to greet the El Search Party. The group ask if the lord knew anything about the Dark El, but Aegirp was unable to provide them any information, noting that if she'd known such a thing existed, she would've attempted to pursue it a long time ago. While she would love to aid them in their pursuits across the Demon Realm, Aegirp acknowledged that there is still much that needs to be done in her own land.