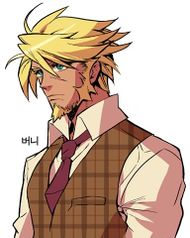 An hitman in Lanox who took Ciel in after he had lost his family. Called "Verni" by Ciel, Verni taught Ciel how to cook and also how to fight, but only if he agreed not to use what he taught as a tool for revenge. He would act as Ciel's father figure, trying to steer the child and himself towards a better path until his passing.

Wolvernian was once one of Lanox's most famous hitman. A legend in his line of work, he was known for his tremendous skill. However one day, he would soon begin to question his profession. After a rival gang had murdered the family of one of Wolvernian's close friends, his friend in a fit of vengeance sought to wipe out those responsible. Unfortunately for his friend, he was outnumbered and was killed by the rival gang. After that day, Wolvernian began to realize the futility to revenge, that it only resulted in an endless cycle of suffering. Realizing this, Wolvernian decided to abandon his life as a hitman and attempt to live in obscurity. However this would not prove easy given his reputation, by either rival gangs seeking revenge of concerned townsmen, for the next year, Wolvernian found himself moving throughout the city multiple times.

Ciel, and a Second Life

A year after the death of his close friend, Wolvernian, while walking through the city, saw Ciel. Knowing the boy had most likely been another victim of Lanox's rampant gang activity, Wolvernian saw an opportunity for a second chance in the young boy, an opportunity to rectify his sins. He offered to take Ciel with him, and Ciel followed. Wolvernian housed the boy and provided him food. He offered to teach Ciel how to cook but Ciel replied with a request to teach him how to fight. Wolvernian agreed to teach Ciel, however only under the condition that he would not use his teaching against humans or to exact revenge.

Ciel went back on his promise and attempted to seek his revenge, Wolvernian caught on. Angry at the boy, he tried to reason with Ciel, however blinded by his thirst for vengeance, Ciel showed no concern for anything else. Aiming to prove a point, Verni forced Ciel to make pancakes, a process which Ciel hated due to his impatience.

Some time passed, Wolvernian and Ciel began to live seemingly normal lives. On the day of Ciel's deceased little sister Terre's birthday, Ciel decided to make cookies in her memory. Verni came in and questioned Ciel's abnormal precision with making the cute animal cookies. Ciel tried to defend himself, saying that they're cute for his sister. The two prayed for Terre, then afterwards had some of the cookies Ciel had made. Ciel soon asked Wolvernian about his life as a hitman. He told Ciel the story about his friend and how he saw Ciel as a second chance to start his life over.

The two had lived together for some time, even moving together to new residences. Ready to move once again, Ciel had handed Wolvernian a note that had been left on their porch. Reading it, he learned that gunners hunting him had learned of his location and were going to gun him down. Keeping his calm and composed expression, he didn't want Ciel to know. Prepared to make his way out, just calling it business, he asks Ciel how their time together was. Ciel oblivious to Verni's situation complained about all the things he made him do. Verni, laughed, happy that he and Ciel were able to live normal live for a time. Satisfied, he thanked Ciel before leaving. Some time during the following week, the gunners who the townsman tipped off were able to kill Wolvernian.