Since you were the one who put the whole dungeon template together. Can you help fix the problem where the KR Loading Screen for 4-1, 4-2, 4-3, and 4-4 won't show up? I tried myself but I don't quite understand the coding for that segment.

eh if you are removing the tabs because of the NA rebalance, could u also add the info into the updates section?

do u think u can make a new template of char infobox for duo char thats looks something like this? 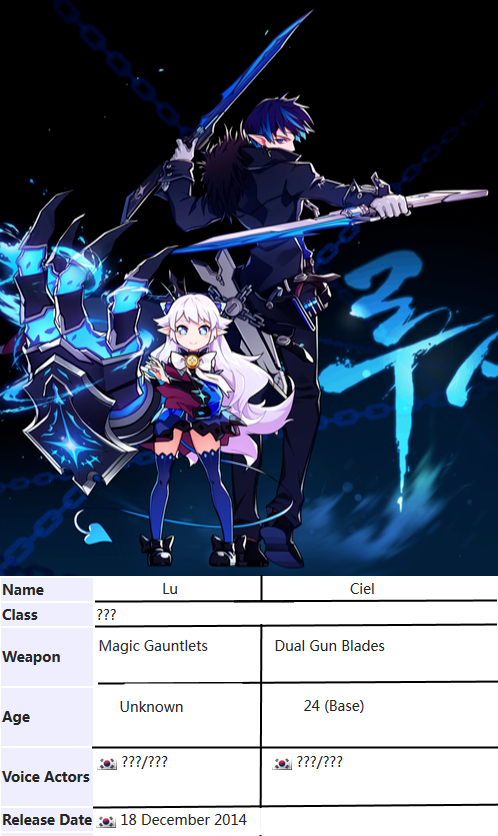 What do you want to say in ORA. I am in the computer lab and the appt. Internet is down. WebQQ does not work now...

Can you check out how the DungeonPage templates work with the Secret Dungeon pages, the template seems to cause this to happen to the BGM section.

can u add the file base for the icons first.

I can't see it on the Ice burners list, but I can see it on the miniature. Can you fix it x.x? Or.. you wanna wait the full version? Cuz I see the wings too on it :o Thanks in advance ><

i dun understand how to change the image from the template.

About Luciel release in your server

Can you find a full body Anudran render please. We've just had this screenshot for quite a while.

could you upload the new image of nem combo 1? the artwork changed.

could you add in this into the skill pages?

Thank you for write the KR Add's updates. ^_^

Yah, with her having four classes it is rather small. I'll hold a poll on the NA forum and I'll see if people would rather the 3 layer template or keep it 2 layers.

[A swordsman who is an elite Velder Kingdom Knight]
Has the endurance to withstand any attack, and overcome any enemy with his power.

As soon as Elsword arrived in Velder, he began to train his swordsmanship skills once more. Being trained by Vanessa, Elsword grew stronger than ever before. Soon the other knights in Velder started to respect him, and he was appointed Lord Knight.

Upon reaching Lv. 35, Sword Knight can advance into Lord Knight. To receive the 2nd job quest, click on the job change notification located below the map select.
Lord Knight can also be obtained by using the Item Mall item: Lord Knight Certificate

Upon reaching Lv70, you will be able to Transcend. To receive the Transcendence quest, click on the job change notification located below the map select.
Transcendence can also be obtained by using the Cash Shop item: Book of Transcendence: God's Will

You can advance into 3rd Job at Level 99.

http://elwiki.net/IPS
this isn't the real forums link
it brings me to this if i click Forms on the navigation Side bar, was wondering if you knew someone(or you) who could change that to the real forums
https://enforums.elswordonline.com (real forums)

if u mean the effects of Power of Love and Power of Engagement, it just the same effects of Baby Fairy Crandle (Elixir) and will removed if someone use another GoD elixir

Can you investigate what's wrong with them on the main page. The field menu seems to cause the dungeon menu to bug out. It is strange since it only occurs on the main page and no other page as far as I can tell. Gameboy224 (talk) 23:26, 13 March 2016 (UTC)

Hey there mog, can I ask where you're getting the status effect icons / transformation cancel icon / b & c icons from? I was under the impression datamining wasnt possible right now because KoG changed the file encryption, did you get around it? ED Senne (talk) 12:54, 18 May 2016 (UTC)

Getting a few renders.

Can you see if you can find story quest dialogue images for, Berauk, King Nasod, Berthe, Avalanche, and Sirena. With the whole giving NPCs individual character page thinking of also including bosses with important story dialogue. Gameboy224 (talk) 07:27, 18 June 2016 (UTC) 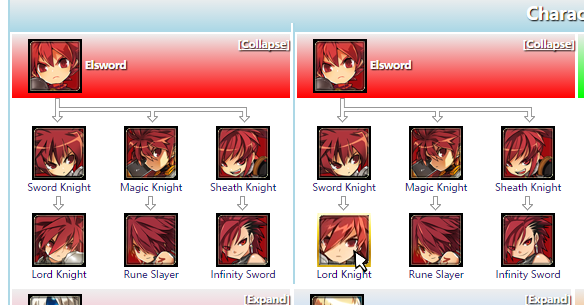 On 12 November 2016, you edited Infernal Blade page and put note "Defense Ignore is always be 100% and only apply for 3 slashes."

So.. The defense ignore amount has no connection at all with the user's fire resistance?

Is this true and tested? Would like to see a way to prove this if possible 0w0. That way I can put my fire resist status elsewhere safely. Thanks! - Flandrean 13:38, 15 November 2016 (JST)

We'll probably clear up a lot of the things once the tooltip separation hits KR later today. What we changed to Unlimited Blade is just from the example that KR's patch note gave us. We'll probably will separate stuff like Teleport when it comes. We will probably touch the skill traits when it hits NA. Gameboy224 (talk) 16:11, 28 December 2016 (UTC)

I updated the icons-images via IB's tag but...

...but seems the site didn't updated at all. I added the icons for Rose (and some for Luciel) for the avatar Yaksha (only red), Salvatore Ventus, Velder Imperial guard, and Evil Tracer S2. The problem is I can't see the new updated version of the images, I continue to see the old version. It's normal or...? Isn't the first time happen when I update the images and this make me sad. Have a nice day/night and sorry for the trouble. --ChibiValy (talk) 21:14, 6 January 2017 (UTC)

Why not change this to this? The latter looks okay with only 1 Collapse option(?) LMNTRX (talk)

I just put it there because i thought why you removed the kr name. Now i realise what you mean.

hi, for future updates to skill pages and such, try to add status effects as status effects/(effect)| effect. just linking to a page that does not have any info on the debuff is kinda useless also.

hi, do you know which is the template to edit the side menu bars for translations? the menu on the left side where u can select characters.

there was a different between those 2 slows, heavy only drop jump while slow drop speed and jump. Also making a new page for heavy with a img showing the bat clinging to the mob is fine.

we could just create another page for binding circle. the reason i did the extra stuff is to show how the debuff looks like ingame. like kill points have chains stuck to you while binding circle just circles.

those new icons for chung, did their trans portrait change also?

https://elwiki.net/w/Armageddon_Blade for arma, the enhanced effect has a extremely minor typo. second should be seconds also, do you know where i could edit enhanced effects?

I've found a couple more Unique-grade El Tear Fragments on the Elsword forum. I've already linked to them on the talk page of the sandbox.

You think it is possible to get the images used in Rose and Ain's prologue tutorials? Decided to update the tutorial pages with the images. As well as Aisha's (the images I found online were of her super old tutorial). Gameboy224 (talk) 09:48, 6 August 2017 (UTC)

Do you know how Ara's and Add's Spec. B are calculated? It's not shown on the Socketing Equipment page anywhere.

All Skill Damage in Upbody

Where did you get the info about the 2nd line- 3rd job names?

Did you datamine the files or is it on their website?

Where did you get the info about fixing an issue where it wouldn't hit Elsword? I don't see it on Babel.

I've been quite curious for quite a while, how do you get titles in such high quality?!

They're furthermore without backgrounds too haha always wondered how you do it. - Lord Aurora (talk) 16:25, 16 November 2018 (GMT)

You Made An Error