Information: This page features an Epic NPC, they are not playable nor can they be unlocked. More info can be found here.
Language:
Code Q-PROTO_00 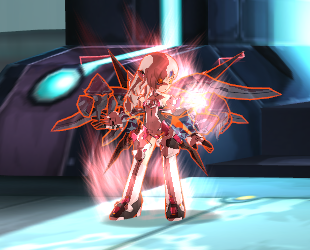 Code: Q-PROTO_00 is known as one of the most powerful Ancient Nasod Prototype Drones. She failed to develop normal human senses, so instead she became one of the strongest Nasod combat troopers that ever existed in Elrios. She has the potential to do everything herself by installing a core of countless data to progress her self-image. She has the ability to maximize combat capability by destroying thousands at a time and making them disappear!

Q-PROTO_00 has access to all of Code Nemesis' basic attacks, with the following modifications:

Part of the Monster Trio of the NPCs (Valak, Edan and Q-PROTO_00), Q-PROTO_00 sports insane speed in all aspects of her play: incredibly fast movement and jump speed, short but dangerous combos that deal incredibly high damage thanks to her Queen's Throne passive, and ultra-damaging skills that are meant to blind-side you with no chance of mana break. Thanks to her mobility and her far reaching attacks and skills, Q-PROTO_00 can easily riddle the entire map with stingers and nasod weaponry, blocking out all avenues of approach. In addition to being the most mobile of all NPCs, she is also the best at hunting down players and taking them by surprise. Not only does she have access to Roar like all members of the Monster Trio, but she can also surprise with the extremely strong Generate Black Hole, or even an ultra-buffed version of Hornet's Sting that snipes you from right across the map.

To an inexperienced player, Q-PROTO_00's speed may be daunting. However, Q-PROTO_00's speed is also her weak point, as she tends to be recklessly aggressive at times. Specifically, Q-PROTO_00 tends to use the >>ZZZ loop a lot to catch, as well as a full three hits of ZZZ when she does not have a confirmed target in close quarters. During these attacks, Q-PROTO_00's back is completely open, permitting you to quickly step behind her and capitalize on this opportunity to combo. Since Q-PROTO_00 is able to respond to melee combos with her gear hit which often activates in combos, and since you'll likely be taking damage from Metal Dust Aura during her combos, the key focus of your combos should be to gather MP over dealing prolonged damage based combos. The bulk of your damage on PROTO should come from Special Actives in consideration of these aspects.

Q-PROTO_00's spam of Metal Dust Aura can be a mixed blessing; while it does make your combos on her a double-edged sword as you are forced to take damage, it quickly fills up your MP and awakening bars, permitting you to spam your strongest Special Actives with reckless abandon. Thanks to her MP passive, as with most NPCs, you are also able to use Special Actives that would normally give your opponent far too much MP to be worth the increased damage. For this reason, Metal Dust Aura can be extremely helpful when you are high on HP, but deadly when you are low on HP. It is imperative for you to avoid Q-PROTO_00's combos because of this: due to the fact that they hit hard and fast, it is unlikely you will have a chance to Mana Break before Q-PROTO_00 completes her combo. Regardless of her short combo chains, you still will be taking immense damage from them thanks to her Queen's Throne passive and Code Nemesis' naturally strong KD combos, which Q-PROTO_00 is particularly partial to.

In order to take full advantage of Q-PROTO_00's AI, it is important to keep her travelling linearly on a horizontal scale. Since she has a naturally aggressive AI with predictable approaches, work on a "bull-fighting" strategy - goad her into doing a >>ZZZ dash attack, or a ZZZ loop, and quickly V-Step behind her and combo. It is important that you minimize the amount of air-time against Q-Proto_00, because anything she can do in the air far surpasses any catches or set-ups that you may have: besides her incredibly ranged ^X which outclasses the vast majority of set-ups, Queen's Throne hits twice as opposed to once on aerial attacks, meaning she gets more damage in when you're in the air, and she also has the lethal Iron Scraps, which while she will rarely use when you are on the ground, will be spammed recklessly when you are in the air. Furthermore, Q-PROTO_00 has greater mobility in the air than any other character. Focus on your strongest ground-based catches and combos, as you will minimize her aerial advantages.

Finally, in terms of skills, the two major damaging skills of Q-PROTO_00 are Iron Scraps and Generate Black Hole. The former is absolutely lethal and must be avoided at all costs: as described above, minimizing air time is an effective strategy for preventing Iron Scraps from hitting you too much of the time. Generate Black Hole is a lesser threat because it still can be mana broken unlike Iron Scraps, which hits too fast for an effective Mana Break; but for this reason, it is important that you retain at least 50-75 MP at all times in case she uses the skill, so you can mana break immediately. While Junk Break and Hornet's Sting can also do significant damage, the former can be mana broken very easily because it hits so slowly, and the latter is rarely used. Atomic Blaster and Mega Electron Ball do deal some damage, but are generally not huge threats unless Q-PROTO_00 uses it as a combo chain tool (you shouldn't be in any combos by her due to her predictable AI anyway).

Avoid hitting Q-Proto while in the air at all costs. She tends to activate Iron Scraps a lot more when you are, and utterly abuses the ability to combo straight after.