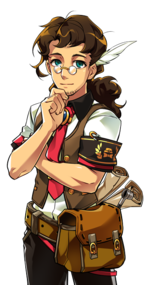 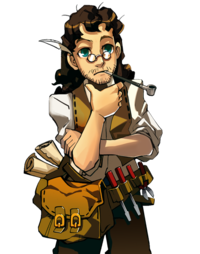 Adams was once Ruben Village's alchemist but he found himself doing other things as time flew by. He often passed the time by Ruben's riverbed, sometimes pursuing his hobby of fishing.

While he had been off the job, Adams spent some of his time exploring Elrios and researching nature. One day, he had found himself hopelessly lost in a dense forest. Following a glimpse of light, Adams found an enormous tree which housed an entire village of Elves. The Elves were welcoming and kind to Adams, despite being a complete stranger to them. Among the Elves, Adams befriended an Elf named Layla. The two would bond over conversations about the countless plants and animals in Elrios and how the world has changed. When it came time for him to leave the village, Layla escorted him out of the forest and saw him off. The next thing Adams knew, he came into White Mist Swamp. Not knowing if what happened was real or just a dream, he still had his notebook, where he wrote everything he saw and learned from Layla. Whenever he gets the chance, Adams would explore the forest, hoping one day he'll fulfill his promise to visit Layla once again, while holding his notebook close to his heart.

One day, he got a cold and decided it to be best to move back inside. After his cold died down, he had accepted a job at Cobo. Ariel and Luriel decided to throw Adams a surprise welcome party. However, it wasn't exactly surprising as Adams caught on to their plans pretty quickly when they asked him for his favorite foods. Willing to play along with them, he spent the time after doing research so they could prepare the party behind his back. During his research, he tells the adventurers of his experience lost in the forest and his friend Layla. After that, when his party was ready, Ariel blindfolded him and lead him to the party. He was very grateful and happy for what Ariel, Luriel, and Myu had done for him. However, he would soon be greeted with a bit more of a grim reality. The three Cobo employees soon begin to rant about how difficult their jobs are and the extremely strict work ethic they have to have, complaining about their hours, lack of vacations, and rumors about their boss. Adams soon realize that he had just made a horrible mistake. He swiftly announces his resignation and tries to leave but Ariel soon commands the adventurers to hunt Adams down so they don't have to cover for his position. He is now the current operator of the Elrios Studio Service.