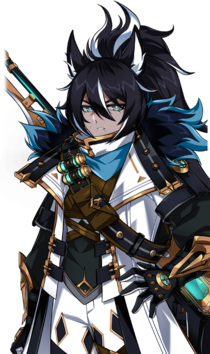 A Nous and leader of Rigomor's surface base of operation, the Aurora Operation Site.

Upon the El Search Party landing in the Pruinaum region, some of the Aurora guard tracked the group down and Asella confronted them. She suspected that they may be some of Berthe's underlings but Aisha tries to explain they're here for Winster's sake, she immediately becomes suspicious that they know of Winster. She sends her men to capture the group, only planning to keep three alive for interrogation. Just as the Aurora forces started to close in, Nichel appeared just in time to vouch for the El Search Party. Asella hears Nichel out and agrees to give them asylum.

Returning to the Aurora camp, the El Search Party are updated of the situation, Asella informing that Winster had been capture but they've been receiving occasional messages from him assuring he is safe. She also informs reports that the White-Ghost Army had learned of a method to track Aegirp's soul fragments and had begun a full scale search. Concerned about the White-Ghost Army getting their hand on more soul fragments, she maps out the general area they suspect one of the fragments should be. Nichel volunteers to head to the area to retrieve the soul herself, Asella apologized to Lu and asks for their aid to retrieve the soul. Lu agrees and Asella gives Nichel a communication device as they embark.

After Nichel obtained the first fragment, she informs Asella of their success and of the visions they'd experienced approaching the soul. Asella hears the story of Aegirp's dreams of peace and very much wishes the same, showing worry for Nichel, she tells her that if things appear too dangerous, it is better she abort the mission instead of risking it all to obtain a soul fragment. Nichel informs her that the El Search Party agreed to head toward the second location immediately, Asella warns Nichel that the White-Ghost Army had reached the area first and were camping around it.

After the El Search Party capture the demon forces at the Sanctuary of the Soul, they take their captives back to Aurora where they are taken into Asella's hands. Processing the captives, Baryon found a device that someone had dropped, Asella confiscated it back and began to pressure the soldier due to the device no longer working. Eve looks at the device and discovered it had just been turned off, Asella was embarrassed by the event and goes on to head the message from the communication device. Hearing the message stating that Berthe had already obtained 3 fragments and the souls were being tracked, the El Search Party decided they need to take the battle straight to Berthe. Asella tells them a trek to the capital would take minimum 2 days, but Baryon informs them of the abandoned train station.

Once the El Search Party reached the White-Ghost Castle, Haivan fled into and locked them out of the main gate. While they were in a pickled, Asella and the Aurora forces appeared just in time thanks to Nichel's updates, she greets her brother-in-law. They arrived in the perfect moment to help them fend of the alerted White-Ghost forces while the El Search Party managed their infiltration of the castle.

Asella and her forces managed to deal with most of the White-Ghost Army and is encouraging many stragglers to abandon the army. She called in for a status report with Nichel who informed she was with Winster and Haivan while the El Search Party went to deal with Berthe however in the middle of their conversation, a barrier began to envelop the castle and communication was lost.

After Nichel successfully merged herself with Aegirp, the barrier faded away and the Aurora forces entered to see what had happened. Asella found everybody just as Nichel revealed herself, now merged with the White-Ghost King.

Asella can imbue your Apocalypse Type-Void, Flames of Judgement-Demonic, and Vestige of Soul - Requiem weapons with various effects using a Imprint Stones.

"Exchange? What do you need?"

"What should I make?"