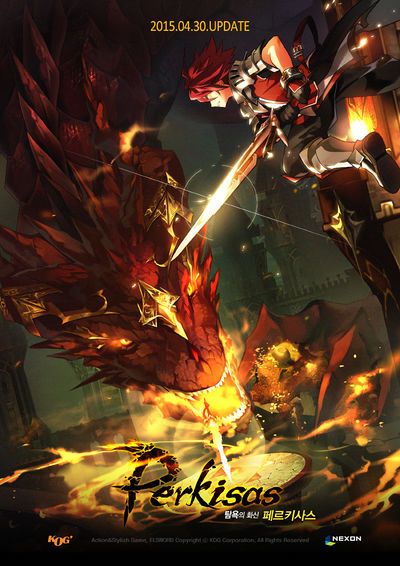 When the great El descended upon Elrios and breathed life all across the continents, a heavenly beast that holds the land's energy was born for every territory. Some of these celestial beasts blessed the lands they roamed, but others slew and pillaged all in their path.

Perkisas, the evil and greedy red dragon that stops at nothing to fill his desire, has settled underground of the forsaken castle's ruins in Ancient Elrian. For a long time, humans have suffered this beast's cruelty while he collects stolen treasures in his nest.

Over time, Perkisas has grown weary of the endless slaughter. He begins to lure adventurers into his lair, with a promise to grant his power and treasure to the one who defeats him. According to legend, a human who passes 3 trials by Perkisas will acquire tremendous power and fortune. No one has succeeded yet.

With the intention of helping Elsword and the El Search Party gain experience and strength for important future missions and his entertainment, Glave leads the adventurers to Perkisas' ruins and puts them through this challenge. Will the group pass the red dragon's trials and be worthy of the legendary power?

During the battle against Perkisas, various orbs will be scattered throughout the stage. These orbs can be used to gain various effects that will benefit the player for a certain duration. These orbs can only be obtained in Phase 1 and Phase 2. In Phase 3, these buffs can only be obtained if the Nightmare Crystal is destroyed within 30 seconds of its appearance. Unlike the first two phases, the buffs will only last for 60 seconds in Phase 3.

The effects of these orbs will be lost if the player were to die before their duration is complete.

Throughout the raid, various treasure chests will be scattered across the stage. These chests can be opened by attacks and can give various items, such as:

After completing one run of Perkisas's Ruin, all surviving players will receive a Perkisas's Treasure Chest, containing one random item from the following list. The Chest can give a random number of Perkisas's Horn Fragment after the release of Phase 2, ranging from 1 ~ 10 Fragments.

The raid scores will be reset if the player were to change their Job Class. In addition, the player's raid score will not be added to the Guild score unless the points were obtained while they are part of that guild.

The leaderboards will be updated every day at 7 AM (PST). When the phase is complete, the rankings will reset to zero and rewards will be sent by mail.