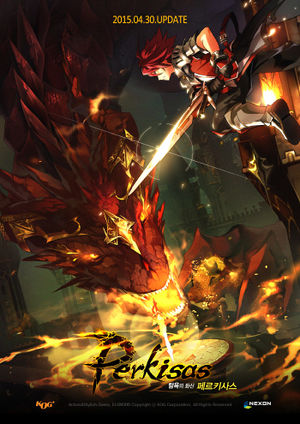 Elsword and the El Search Party reach the top of the forsaken castle's ruins in Ancient Elian, having just survived Perkisas's first trial. Enraged, the red dragon takes to the air and goes on another terrible rampage. The adventurers will need to do more than their own weapons are capable of, in order to take the furious beast down.

Boss: Perkisas, the Incarnation of Greed

In part one, Perkisas will chase you as you travel across the Ruins. This section of the fight will last for 6 minutes.

In part two, Perkisas will corner the group at the summit of the Ruins.

In part three, Perkisas will fly and cannot be hit with normal attacks. To attack him, you must use the harpoon launchers at the end of the stage.