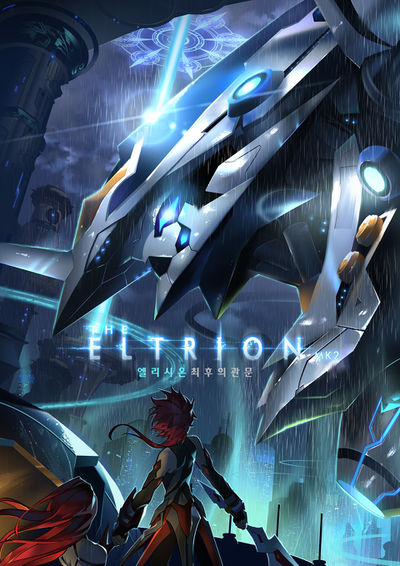 A long time ago, after a meteor shower covered Elysion, a team of Atlas Nasod Developers persisted on studying new anti-aircraft defenses. During their time studying these defenses, they were reminded of Aero City, a floating city which housed Eltrion – who defended the skies of Elrianode in its prime.

Unfortunately, Aero City has been reduced to ruins making it impossible to travel to so the group had to search for alternative solutions. But as luck would have it, the Atlas Nasod Developers realized that there was a group of combat units searching El that had successfully reached Aero City through the Chrono Gate and had battled against Eltrion.

The group studied the traces of these combat units and was eventually able to pinpoint the station's coordinates for Aero City. They forced themselves inside the Chrono Gate where they found Eltrion. These Atlas Nasod Developers began upgrading Eltrion with the latest technology, until it became Eltrion MK2.

Eltrion MK2 now guards the final gate that leads to Elysion as an anti-aircraft defender and the Elgang has been tasked to end its reign of terror.

After completing one run against Eltrion MK2, all surviving players will receive an

Rank Rewards of the Boss Raid

The raid scores will be reset if the player were to change their Job Class. In addition, the player's raid score will not be added to the Guild score unless the points were obtained while they are part of the guild.

The leaderboards will be updated every day at 6 AM. When the week is complete, the rankings will reset to zero and rewards will be sent by mail.