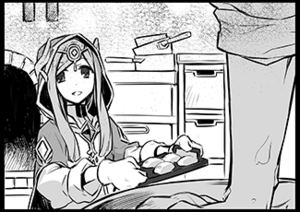 The older sister of the Earth Master Bellonde Gaia, she was the first Earth Priestess to be chosen by the El Masters.

With the El Masters seeking out a method to circumvent the sole need of the El Lady, they proposed the inclusion of an El Priestess system. Individuals they'd train in the art of maintaining the El as oppose to the Masters who's purpose was primarily to protect it. While her younger brother, Bellonde would go on to become the Earth Master, when they called for El Priestesses, Verdel was more than willing to step up to the task. She was trained by her brother and the other masters how to control and maintain the El's energy.

When the El Exploded, the land was left in a state of utter chaos. In a desperate attempt to salvage the scattered El, the El Masters went their separate ways and poured their energy into various large El fragments all over the world. Verdel followed her brother when he traveled towards what would become the Velder region. When Gaia poured his energy into the El, he fell into a state of slumber. With her brother having sacrificed himself to keep the El's power alive, Verdel as well as the other priestesses assigned themselves to the their respective Els and would do everything in their power to rebuild society around them.

When Verdel passed away, she instructed that she wanted her grave to be in the Black Forests. She believed that she couldn't rest in a place of peace with her brother being the one to have sacrificed himself to keep the El's power alive.