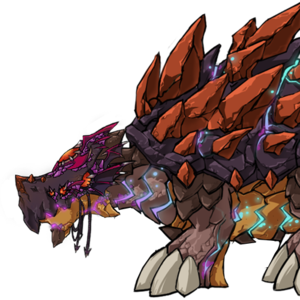 The Ancient Holy Beast of Sander and the origin of the Trock species. In the past, the enraged Behemoth almost wiped out all of Sander but was sealed away by the then Wind Priestess.

The Old Holy Beast of wind had gone out of control, consumed with anger, its anger manifested itself as the Manifestation of Rage. No longer in control of itself, its anger took control of Behemoth and the Trocks under its command. In this blind rage, the Behemoth nearly destroyed all of Sander but due to the Caluso, they were able to immobilize the beast. The previous Wind Priestess, Anduran's mother, was able to sacrifice herself to calm and seal the beast in Parugo Mountain. Ever since, the Wind Priestess had been one with Behemoth and kept him calm.

Using the Wind Priestess Anduran, Karis was able to reawaken the Behemoth from its slumber. With the Dark El, Karis controlled the Behemoth's movements. With aid from the Sandtilus, the Caluso were able to immobilize the Behemoth. While connected to Anduran, with the Behemoth free of Karis's control, her mother called out from inside Behemoth saying that the beast will be able to recover, and she'll look over him. However Karis was not done and tried to control Behemoth herself but was ultimately defeated again by the El Search Party. With Karis gone, the Behemoth was weakened, but with the Wind El, he could regain his strength and lay dormant in Parugo Mountain once more under the old Wind Priestess's watch.