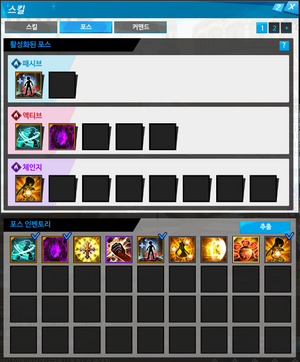 Force Skills are divided into three categories, Force Passives, Force Actives, and Force Mod skills. All three of these type of skills can be selected as well as toggled on and off at any given time (except PvP).

Upon unlocking this new system, an additional 5 skill slots will be made available for a player to use, and you are able to switch between the regular slots and these additional slots with the spacebar at will. Despite being unlocked as part of the Force Skill system, these slots are not exclusive to Force Actives, and any skill can be placed on them. There is however, still a limit of up to 10 normal skills that can be carried at any given time. The additional slots also lack a Transcendance bonus slot.

With the new system comes a new UI which stores all the information regarding the new Force Skills.

Force Passives are exactly as the name might imply. They are skill which when equipped with provide some sort of passive benefit. The passives are non-character specific.

An example is the skill as shown in the picture called "Illipia's Aura", which increases the user's health as well as allow them to restore the HP when out of combat.

Force Actives are non-character specific actives command which can provide a variety to attack or buffs.

Force Mod skills are skills which influence specific skills for each individual character and class. When a Force Mod skill is equipped in the menu, that specific skill with go through a functional change when used often changing aspects of the skill completely. Each Mod skill is a separate drop and you can obtain the Mod skills of other classes, however you will not be able to do anything with them.

A unique part of the Force Skills system is that some skills come with different rarities which influence their performance. This however only applies to Passives and Actives. Mod skills are always categorized as Common and are not influenced by rarity.

With Passives and Actives, they can come in 4 different rarities. Rare, Elite, Unique, and Legendary. For most skills, they will come only in Rare, Elite, or Unique variants. These variants determine the effectiveness of the passive of active's traits.