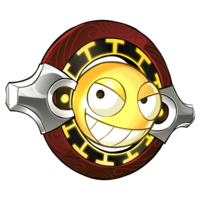 An artificial intelligence machine created by the Empyrean scientist Cloud Mason. He was installed with vast records of Elrios and appointed as Rose's guide in the foreign dimension.

Zero was created in Empyrean by the empire's lead researcher of Elrios, Cloud Mason. The AI was uploaded with stores of ancient records of Elrios and was designated to Rose in their operation to investigate the source of the Great Calamity rooted in Elrios. Being sent with Rose through the dimensional portal, the two of them wind up teleporting into a pocket dimension between, finding themselves on the floating island of Atlas. Upon arrival, Zero is activated and almost immediately, the AI complains of his current predicament, wishing he had been stationed to oversee Defense Systems in Empyrean rather than forcibly assigned to Elrios.

When Elsword gave himself to restore the Large El, Zero became unresponsive. Upon the El Lady's request, Rose took Zero to the El and within it, the robot regained consciousness. After exiting the El, they trail the El Search Party into the Water Dragon Sanctum. While there, due to being connected to the El, Zero began projection images of the El Search Party's recent activity in the sanctum. This power is short lived but provide them with enough to give them an idea of what is going on.

Using the knowledge of Elrios stored in his systems, Zero was able to search up a long dated map of Elrianode. This proved very useful in tracking down the location of the capital's palace from eras ago. With this knowledge, Rose presents the information to Denif who asks them to investigate the area while the El Search Party were still in the midst of searching Elrianode City. Rose and Zero went to search the ruins of what used to be the ancient palace, there they find the entrance to Debrian Laboratory and secure the area before reporting back to Denif.

After returning to Elrianode from their experience in Rigomor, Rose and Zero decided to try and make contact with the Demon Realm. With the help of Ventus, Zero tries to hone into a frequency from the other side. Eventually after much work, they get a vague message to work with. Though them being able to communicate with the Demon Realm raised some alarms for who they couldn't contact Empyrean.