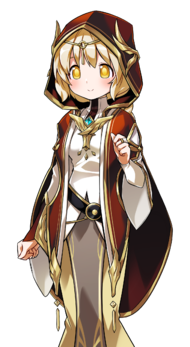 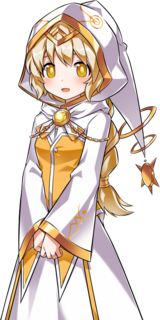 The Priestess of the Sun El, Gloria was rescued after the party defeats Sdeing in the Ash Covered Village.

Alarmed by the visions of the incoming calamity, Gloria and Darkmoon both rushed their way to Lanox, where they came into contact with the Fire Priestess Ignia. Ignia promised to protect the two Priestesses as they made their way to Lanox. However, without the either of the Priestesses realizing it, Ignia double crossed them and knocked them unconscious. With the two knocked out, Ignia gave the Priestesses to the now entranced Steel Blacksmiths in the Ash Covered Village.

Now held deep inside the Steel Blacksmith's mines, following a trail of clues, the El Search Party find Gloria and Darkmoon held captive in some sort of demonic looking altar. They were able to free the Sun and Moon Priestesses and the two reunited with Ignia. Ara asked them what had happened to them but Darkmoon stated that they don't remember anything, having been unconscious during the whole process. Add disappointing, threw out a rude remark causing Gloria to cry.

After the El Search Party scaled the Volcanic Flames Entrance with Ignia, they ran back to Lanox with news of her betrayal. Both Gloria and Darkmoon could not believe the news that Ignia was working alongside the Demons. Gloria became saddened by the news while Darkmoon helped hold Gloria together.

When the group successfully were able to tire out Ifritan, Darkmoon and Gloria arrived to help make peace with the Holy Beast. Gloria looks after the Holy Beast and tells the El Search Party to obtain Fire El fragments to rejuvenate the Ifritan's energy. Once they returned with the Fire El, Gloria was able to heal Ifritan. Ifritan tells the group that the Demons were using the Earth Priestess to help summon the Demon God. Gloria worries that the Earth Priestess Artea is being controlled by the Demons just as Ifritan was.

Acting more assertively, Gloria tells a panicking Edel to calm herself down and make sure the village was fine while she commanded the El Search Party enter the Chasm and find Artea before the Grand Cavern: Chasm of the Divide Land gets worse. When the group report that Artea is being held prisoner, Gloria worries that they may be too late, that Artea's role had already been complete and the Demons here on the brink of reviving the Demon God. As the El Search Party was about to save Artea, the cavern collapse, but she was saved by Ignia. Ignia explains the situation and tells the two Priestesses she had used them to gain the El Search Party's trust. She also told them that she also felt compelled to protect them in the end, but Scar was too powerful for her to push forward her desires. Gloria and Darkmoon forgive Ignia as they approach the final confrontation with Scar. Having defeated Scar and the Demon God Sult sealed away by the El Lady, the Priestesses are left in the dark with what the El Lady's words. Concerned about the situation, Gloria told Elsword that the Priestesses could help them find the El Lady.

Gloria geared up alongside the other Priestesses and made her way to the Abyssal Ruins in the Distant Ruins, where they would perform their ritual to open a gate to wherever the El Lady may be. Trusting of the Priestesses the El Search Party walking into the pillar of light then it closed. The ruins growing silent, Gloria states that they have left, and tells everybody that it is time that they once again part ways, to protect their El and pray for Elsword and his friends.

Chapter 27: The Boy and the El

After Elsword chose to sacrifice himself to restore the El, the Sun El that Gloria protected suddenly combined back with the other El in order to reform the original large El. She as well as the other Priestesses were all teleported to where the El combined, the newly reawakened city of Elrianode.

Solace and Hernia arrived in response to the threat of an all-out war for the El Tower. Hernia insisted on sacrificing herself to the El to keep is stable, however Denif insisted she now and all the El Priestesses arrived to convince her out of her plan. Artea explains that all the Priestesses have been training for generations for the day to protect the El, that Hernia can trust them and not have to deal with it on her own. Ignia tells Hernia that it should have been that way from the start, that they should have always worked together. Gloria points to the El Search Party to show her what teamwork can do and Anduran insists that Hernia put her trust in them. Hernia realizes she had been blinded by her duties that she had ignored those around her that wanted to help and agrees to their request. The Masters, Priestesses, and El Lady all prepare themselves for their duty to protect the El as Henir monsters soon begin to swarm the El Tower.

When Hennon turned into the Interdimensional Colossus, Anduran and Gloria were shocked to see such a massive beast outside the El Tower. They quickly alerted Denif and he called for everybody in the El Tower to help him place up a barrier. Using their power, they manage to surround the El Tower in a protective barrier to prevent monsters and the colossus from doing harm to it, and the El.

When the Interdimensional Colossus had been slain by the El Search Party, things began to become quieter at the monster stopped attacking. The Masters and Priestesses were able to let down the barrier and the threat facing Elrianode had dissipated. Denif and Ventus both believed that the El Lady should not be bound by her duty as the sole protector of the El, the El Priestesses took on the role in the El Lady's place, stabilizing the El as a group.

After the El Search Party left, the priestesses and the El Masters talked about their history and everything that has happened since the El Explosion. Gloria notices Darkmoon staring off and asks her what it wrong. She felt a deep regret for having failed to protect the Moon El in Ara's village. The other priestesses reflect on their own failures to protect their El. Denif eases the Priestesses and tells them to look towards the future and what they choose to do next.

Anduran breaks the tension and asks the group if they would want to help her prepare her signature vegetable stew.

After the El Search Party came back from Add's failed plan to use the Debrian Portal, the group called the El Masters and Priestesses when they arrived back in Elrianode to tell them about their hypothesis about the El. They came to a conclusion to try and investigate what they believed to be a seal underneath the El Tower, the priestesses and El Masters followed. Reaching the ancient primordial seal, Denif requested the help of the priestesses to use their powers to pry a hole into the seal, just enough to let the El Search Party through before it closed back up.

Gloria is at attention and helps treat Laby once she arrived in Elrianode, taking the child off of Artea's hands. When Laby awoke, Gloria tried checking her condition, which had healed surprisingly fast. When Laby felt better she quickly ran out of the room to seek Gaia, Gloria attempted to pursue but was easily outpaced. When she caught up, Denif asked if Darkmoon had finished healing her but Gloria explains that her injuries had already healed beforehand.

She and the other priestesses listen to Laby's story. When Laby began to speak of the three mornings she experienced, the priestesses deduced they were related to the major El events. They speculate Elsword involvement in the El's restoration may have freed her. Darkmoon suggests the possibility Laby may be a demon, prompting Laby to speak of Calonne and the other demons in North Fluone, news which took the priestesses by surprise, news which filled Gloria with dread. Gloria reflects on the horrors of when the demons took Darkmoon's El and their kidnapping in Lanox. She sees all the pain the demons had caused her and her sister and feels she can't forgive them. Sasha calms her down and expresses that they trust Lu who is a demon and that both humans and demons are capable of both good and evil. Gloria thanks Sasha for her words and starts to put some trust in Laby.

When Laby came out to tell them the truth about Nisha, many of them were confused, but Gloria was the first to assert her trust in the girl's words. Laby existence was pulled further into question and they begun to wonder if the Demon Realm is the key. Gaia begins to worry that they are putting too much weight on the El Search Party, but Denif tells Gaia of their involvement and their ends. During their conversation, Sasha noticed the Spirit Stone react, prompting them to all open the seal where Ventus and Rosso return.

After the Fire Master had returned, the Priestesses returned back to their duties, Gloria notices that Ignia was not exerting herself as much and was glad. She noticed that the strain had lightened since Rosso's arrival. They tell Ignia that she should make amends with Rosso but they are cut short when Laby returns from her training. Gloria comes to greet the returned girl.

When the El Search Party neared Elrianode all the master and priestesses went to undo the seal to allow them back to Elrios. When they did so, things were in chaos as Henir's realm had descended into disarray. Nobody could move from their spot except Laby who volunteers to aid the El Search Party. Denif agrees and the girl jumps in, she does stop the monsters from swarming into Elrianode but the realm shifts, causing her and the El Search Party to fall into a fissure.

At around the same time the El Search Party all reunited back in Elrianode, Denif and the other present Masters met with the priestesses. At this meeting, Denif reveals to the priestesses the truth about the El Explosion, that is was Ebalon who caused the incident, as an agent of Henir's Order. Ignia wondered why it was that history only mentioned Solace and the El Lady. Denif tells her that they believed the world was not in a state to learn the truth, Ventus noting trust in the El Masters was already at an all time low that they essentially had to beg to make the Elemental El. The news made Darkmoon realize the Moon Priestess sacrificed herself to make the small Moon El. Denif informs that anything less than full control over the element would result in the draining of ones life force as with the First Moon Priestess. Ventus finds is curious that the Sun Priestess survived, Denif remained silent, which makes him realize that Solace was aiding from the sidelines and noting is couldn't have been easy for the Sun Priestess. Gloria tells them that the Sun Priestess went into seclusion and was the one to seek out Moon Priestess candidates. Darkmoon noting it to be the reason the Moon and Sun Priestesses have a very close relationship and how they protected each other. Denif was glad to hear they did their duty to the end. Moving on to their current situation, Denif asks if Ventus had any new information about Henir's Order which he unfortunately did not. Artea was uncertain why the group would not make any significant actions till recently. Rosso brings up if they should inform the El Search Party which Denif decides against, choosing to continue their investigation separately.