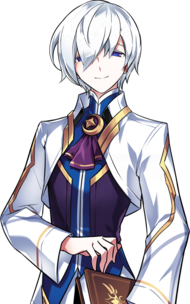 The elder son of the House of Ebalon, their candidate for the title of Moon Master, however his lacking affinity toward the power of darkness lead him to lack in qualifications.

The El Master of Moon

Harque was the elder son of the House of Ebalon and was trained to one day take on the mantle of El Master. Though it turned out that while he possessed excellent control over the Moon element, he was lacking in his affinity toward the dark element, whom his younger brother Noah had greater affinity towards. Between his intense training to prepare himself to become El Master, he and his brother shared an especially close bond.

Though Harque lacked the qualifications and everybody around were beginning to accept the Ebalon household would not produce a successor to the El Master title, Harque began fiddling with the power of Moon and discovered a way to manipulate the flow of time. This discovery caught the interest of Henir's Order. The Order approached Harque about the power but his refusal to cooperate led to Dantelion staging Harque's assassination.

On that night, Dantelion appeared and all the servants in the House of Ebalon turned a blind eye due to the man's manipulation. Harque tried to take Noah and flee the house but was struck down by Dantelion. He pleas Noah to escape the house and alert the guards, Noah runs and tries to get help from the servants, but they were compromised by Dantelion and Noah was caught. While Harque was now dead, the Moon Priestess, Misty took Harque's time manipulating device and gave it to Noah. Dantelion assumed Ebalon's form and wiped the memories of that night from everybody's minds. Taking Harque's place without anybody noticing.