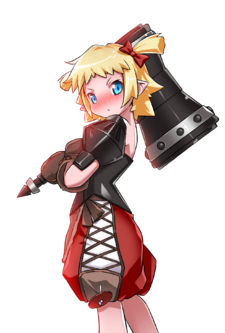 Steel is a Dwarf and the daughter of a blacksmith. Small at age 13 but surprisingly strong, this talented weapons maker is fascinated by steel, iron, and ore, and couldn't care less about gentle things like paper or cloth. Must be why her clothes are all worn out.

While the El Search Party investigated the Ashen Land they discovered a brooch from one of the Steel Engineers. Reporting back to Ignia, Steel got wind and jumped in immediately. Recognizing the design of the brooch instantly, he identified it as being made by the Steel Blacksmiths which reside in the Ash Covered Village. The El Search Party head off to investigate the village where they find the missing Priestesses Gloria and Darkmoon. Curious what the Steel Blacksmiths aimed to do with the Priestesses, Ignia commands the El Search Party to capture their leader, Sdeing. Steel jumps in and exclaims that they better retrieve him alive. When Sdeing was brought back to Lanox, Steel fan to her father's side but can feel that something was off.

Hearing her father mumble about the Beautify Springs, Steel recognizes that they're talking about the Phantasmal Geyser. She informs everybody that her father had sent men to investigate the springs but had lost contact with them. Certain that something was amiss at the geysers, she and the group go and take a sample from the springs. While at the springs Elsword became slightly intoxicated by the water's aroma and the group took the sample back to Pesop. After Pesop deduced the water acting like a sort of charming elixir, Steel burst in fury that her father and his workers had been controlled by the Demons. While the Search Party was able to free everybody of the water's control, Steel informs everybody that her father's condition is still getting worse. Pesop suggesting they release the geyser spirits inside Sirena's Crystal Ball, Steel was the first person out of the door to find it. Sdeing beginning to regain consciousness, Steel stood by her father's side.

After that, when the El Search Party prepared to gear up to head towards the Volcanic Flames Entrance, Steel alongside her father Sdeing were ready to craft the group heat resistant armor for the trip. After traversing through the Volcanic Grounds, Ignia betrayed the group and they rushed back to Lanox. Steel being the first to notice them and asking them what had gone wrong.

Traveling to the Collapsing Temple of Fire, Steel alongside Pesop proposed the use of a Metal Hair Tie they used as offerings to the Holy Beast as a means of snapping him out of his trance. However the plan failed. Needing to stop the Holy Beast and Demons, Add proposed to simply suppress the beast and kill the demons, or kill both of them. Steel quickly retaliated at him saying that they must save the Holy Beast. When the El Search Party were able to capture Ifritan, Steel stood in amazement gazing at the Holy Beast of Fire Ifritan.

With Lanox back to a stable state and Ifritan back to his former self, Steel wanted to make accessories to offer to the Fire Holy Beast. Steel was full of enthusiasm where making her offering to Ifritan. So, much so that her father Sdeing was curious and a bit concerned if she should have such excitement to see the Holy Beast. Steel replied that of course it is, and that she wants to give Ifritan a new head ornament.