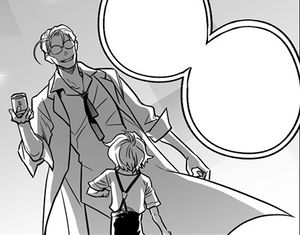 Add's father and a very wealthy Nasod Researcher. A man who is very invested in his work and research more than anything else.

During his live, Asker had planned to create a human weapon using Nasod technology, one who would bear the Grenore name. When Edward was born, from the very beginning, Asker did not think much of the boy as his son, but as a mere instrument for his end goal plan. For much of Edwards's childhood, Asker would drill the boy in the craft and research on Nasods, pushing the boy to his limits, never satisfied with the boy's progress. From time to time, Asker would have to leave his mansion to conduct various experiments elsewhere, but when he never showed any affection or interest in the young Edward. If he wasn't trying to drill the boy with harsh studies, he completely ignored and shunned the child.

One day, the Genore family servants relayed a letter from the Nasod Ruler, an organization dedicated to the destruction of Nasods. Growing concerned that organization may soon find his mansion, Asker soon disposed of his servants first. For some time after, he could continue to drill Edward and occasionally venture outside on various tasks. Accelerating his plans, Asker began doing various tests on Edward, take measurements and injection the boy with various materials. The boy began to feel great concern towards his father and sought refuge with his mother Grace who was not always there.

After Grace learned about Asker's experiments on their child Edward, she soon confronted her husband. Deeply concerned about their child, she tried to face Asker, but Asker soon revealed his true intentions for the boy. She was appalled by her husband's actions, the young Edward stood just outside the door listening in on their conversation.

Reaching the final steps of his plans, he retrieved Edward for the final step of his plan. Using the power of the El and Nasod technology, he implanted Nasod components into the boy. While the effects were not evident at first, they would turn the boy into a weapon when finally activated. Asker during the time, most likely when he was away from his mansion was working inside an ancient Nasod library filled with vast knowledge about ancient Nasods. Inside he was able to harness the library's energy and created a time machine. Among other things he created a Nasod guide, Dynamo, who would be the key to activating Edward's battle code and turning him into a powerful weapon.

Asker was killed alongside his wife when the Nasod Ruler raided their mansion.