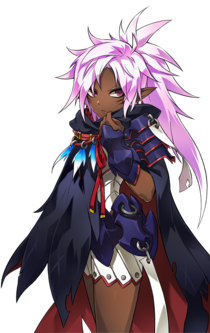 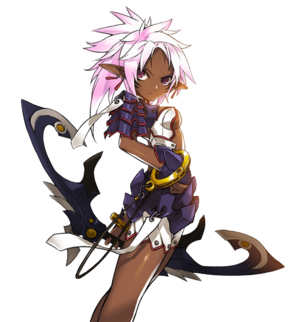 Originally the leader of the Dark Elf forces and the 2nd Squad Commander of the White-Ghost Army. A master strategist who defected from her race to help the demons in their conquest of Velder, until she herself defected from the army to ensure the safety of her own race.

When pressure from the Demon King's forces neared the Dark Elf forests in Varnimyr, Chloe was fully aware that the stubborn Dark Elves would now bow to the new regime taking hold of the Demon Realm. Understanding that the Dark Elves might not stand a chance against the Demon King's forces, Chloe took her followers and decided to join the Demon Army in exchange for the safety of her village. She would land a place as the 2nd Squad Commander of the White-Ghost Army.

Chapter 10: Velder is in danger[edit]

When the Demon Army set their sights on an invasion of Elrios, Chloe played an integral part in the invasion of Velder. She led the demons through into Velder by opening a gateway where the Earth El was. When Chloe and her minions made their way into the hall where the Earth Priestess was, she was informed that Jin and In were in the area and were seen taking off. Taking no concern with their actions, Chloe continued with her plans for Velder.

After being defeated, Chloe escaped the area and joined the demon squads patrolling Burning Hope Bridge. The El Search Party's attempt to reclaim the palace ended in complete failure as the demons had prepared a large amount of explosives, deeming the area far too dangerous to proceed. In an attempt to escape with as little civilian casualties as possible, they make their way through the now Burning Hope Bridge. As soon as they made it to the other side into Commercial Area 1, the group was attacked by Chloe and her army of Glitters and Dark Elves. Desperate to save his friends, Elsword shut the gates between Hope Bridge and Commercial Area 1 with his friends and allies on the other side. Elsword was struck down by Chloe, ready to impale Elsword with a sword but was stopped by Elesis. Unprepared to deal with Elesis, the dark elf retreated to Southern Gate. There she caught the El Search Party by surprise with her ability to summon Dark Nephilim an infinite amount of times. After the El Search Party was able to destroy the Rune-Imprinted Stone Chloe used to summon Dark Nephilim, she escaped.

Some time between her escape from Velder and her reappearance in Hamel, some force had started to corrupt her body, turning her into Fallen Chloe. While Denka was researching the Guardian Stone, Chloe had stolen it in the darkness of night. She also went and attempted to assassinate Rod Ross but was chased off by his guard. While difficult, the El Search Party was able to track Chloe down in the Heart of the Ancient Waterway and they retrieved the Guardian Stone back from Chloe.

Defeated, she fled again to the Halls of Water, where she along with her subordinates working under Ran, defended the Hall of Water and all of them held pieces of confidential information about Ran's plans and what he did to Helputt.

Chapter 33: To the Demon Realm[edit]

After the events in Hamel, Chloe managed to survive her circumstances and in the end decided to leave the Demon Army behind. At some point, she managed to find her way back to the Demon Realm where she made her way to the Dark Elf Village.

When the El Search Party finally reached the Demon Realm, they found themselves in the Guardian's Forest. The group found themselves facing one of the forest's guardians known as the Red Guardian. Chloe heard the noise from the fight and went to go investigate it, however she was too late, the El Search Party had already defeated the Red Guardian. Upon seeing what they had done, Chloe was floored with anger. The El Search Party soon noticed who had come and were all shocked to see Chloe alive and in the Demon Realm, believing that she had died after the events in Hamel. Chloe expresses that she isn't weak, that she wouldn't die so easily. Elesis notices that she doesn't have any subordinates with her, suspicious given Chloe's prior ranking. Chloe eventually telling the group that she had left the Demon Army and has business with the Dark Elf Village nearby.

She continues to express her anger towards the group for having defeated the Red Guardian, explaining its importance to the forest, and that the Dark Elves have been guardians of the Red Guardian, living together symbiotically. Raven reluctantly proposes among the El Search Party that they should seek Chloe's aid to escape the forest. Before the group could even pitch the idea, Chloe refused whatever offer they would've had. Elesis tells her that they don't have to join sides but that they can both temporarily benefit from the offer, helping her get to the village, and she helping them get through the forest. Chloe reluctantly agrees.

Chloe with assistance of the El Search Party approach the Dark Elves' Outpost. On the way, the El Search Party were extra cautious about anything in the Demon Realm, even trying to avoid the water which Add analyzes to be normal water, Chloe is annoyed by the group's ignorance of the Demon Realm. Nearing the outpost Chloe notices that the security had been increased after the incident regarding the Red Guardian. The group are discovered and the Dark Elves proceed to try and hunt them down. Rena is confused at what happened and Chloe explains that she is branded as a traitor to the village but insists she had a trick up her sleeve. Deep in the base, they encounter Sentinel Commander who calls upon the Blue Guardian to assist her in battle, the El Search Party and Chloe manage to defeat her. As Rena fired a final shot, the arrow was nullified as the Dark Elf Elder, Edith showed herself, Chloe remained in silence as her elder appeared. She and Edith speak in their tongue, Edith apologizing for the Dark Elves' actions but Chloe being unconcerned with it. Chloe informs that Rena is capable to speaking the ancient Elven tongue so the two of them talked. During their conversation, Chloe spoke of the two race's history, that Elves and Dark Elves hailed from the same race and how the Dark Elves had simply migrated to the Dark Continent and had become attuned to the demonic energy, Elesis was surprised to have learned that the Dark Continent meant the Demon Realm. Chloe then goes on to speak with Edith about what she had come for, to warn the Dark Elves of a potential incoming threat from the Demon Army due to her having defected from their ranks.