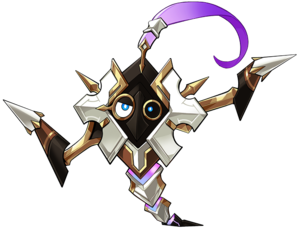 The most knowledgeable Nasod in Elysion is quite the talker. It's a good thing, too, because the El Search Party will need his expertise for their mission as they make their way through Elysion.

The El Search Party made their way to find Hugo for his know how on how to bypass the Nasod Guards. Rena looked around but couldn't see anybody when Hugo suddenly appeared by surprise. He had been searching for a part he may have lost on the floor and explained that he was simultaneously thinking that he should make use of his Nasod arm but had lent it to a Nasod scout. Ara, Lu, and Ciel were all left confused by Hugo's quick rambling but Add was able to understand him clearly. Add asked Hugo about the situation inside Adrian's Palace. Hugo responded telling the group that he knows that Adrian had sent out a distress call before the palace went silent. He says that even since then, the tower has been put under high alert, he says that if they are able to break the barrier surrounding the palace, the alert will be lifted.

Having received information from Theodore, the group go to Hugo is hopes of making sense of it. Add presents Hugo with the specs of the core inside Solace's Fortress, Hugo suspects that the cores are what supplies power for Solace's army by storing and amplify Diceon energy. Hugo tells the group to go and destroy the cores as that will stop the flow of power to Solace's army.

After the Solace had activated his Diceon device, Hugo was given a surge of inspiration to device a machine of his own. Ever since, he's planned out and constructed devices inspired by Solace's creation. However, all of which have since ended in failure, typically causing a massive explosion. In his pursuit, he enlisted the help of Theodore and together they have continued their research. Unfortunately, due to past failures, the two were under the watch of Durenda who was concerned that their experiments could spell the destruction of Elysion.

In another one of their attempted experiments, Durenda noticed their actions and warned the two that she will not tolerate if their experiments cause any more damage to Elysion. Hugo promises that his latest version will not cause another explosion. After adjusting a few things, the devices reacted and exploded. Hugo was in a state of confusion on what had gone wrong. Durenda recovering from the explosion lashes out at the two and swears to report the two to Adrian directly.

"This, this, and this! And what I mentioned earlier! Ah, perhaps combining this and tha-..."