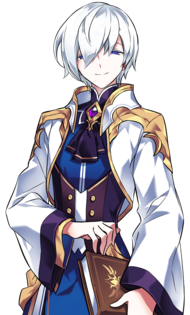 One of the Seven Sages of Seven Tower and a top ranked member of Henir's Order. He was the one to disguise himself as Ebalon and infiltrate the ranks of the El Tower.

In the ancient past, Dantelion served as the Sage of the Tower of Mirage. Despite his status as a very high ranking member of Seven Tower, very little was known about him at the time as he did not particularly stand out besides his title of Sage.

Encounter with the Dark El

At some point, Dantelion alongside Henir's Order were involved in a ploy to shatter the Dark El. His attempts were successful as he bore witness to the shard's destruction and with it, saw something awaken from the Dark El. After this act, his sights were then shifted to the Large El in Elrios which he theorized contained the same thing he found dormant in the Dark El.

Infiltrating the House of Ebalon

As part of the Order's plans to shatter the El, with the help of the Moon Priestess Misty, Dantelion planted seeds in the House of Ebalon which allowed him to infiltrate the estate with little issue. Dantelion then successfully assassinated Harque Ebalon and assumed his form. A young Noah bore witness to the act, but Dantelion caught up to the boy who was trying to call for help, but all the servants in the house were already under Dantelion's manipulation. He puts Noah into a slumber and severs his memories, he and Misty take the boy back to his room while he disposed of Harque's corpse.

Dantelion then successfully played the role of Harque Ebalon and demonstrated his powers to claim the title of El Master. During this time, he would occasionally return to the Ebalon estate to inject the Moon energy into Noah under the guise of visiting his sickly little brother.

While serving his faux term as the Moon Master, he played his role flawlessly without arousing any suspicion from the other El Masters or the El Lady. He partook in all the responsibilities any other El Master would and became one who would often console the El Lady as she faced the Illuminous Phenomenon. Any moments when he would ramble information which would be blasphemous or incriminating, he would use his magic to impede the memories of those who heard him.

Dantelion tells Solace about the Illuminous Phenomenon, a series of events which occurs to any person chosen by the goddess Ishmael to become the El Lady. Dantelion mentions that those who are chosen to be the El Lady are destined to have their emotions, memories, and sense of humanity slowly stripped away from them. In the end, the El Lady will become a mere component of the El. He tells Solace that their duty and devotion as El Masters are nothing in comparison to what the El Lady must sacrifice, describing the fate as unfortunate.

On the day of the Harmony Festival, Dantelion enacts his ploy to shatter the Large El, secretly activating Solace's machine in such a way as to cause the El to go completely unstable. Dantelion completely vanished from the scene as chaos began to ensue within the El Tower. Solace confronts the El Lady as she was in a sleep-like state to be consumed by the El. Without much choice, Solace manages to take the El Lady and they flee. The absence of the El Lady resulted in the El Explosion which ravaged Elrios as Dantelion watched from afar.