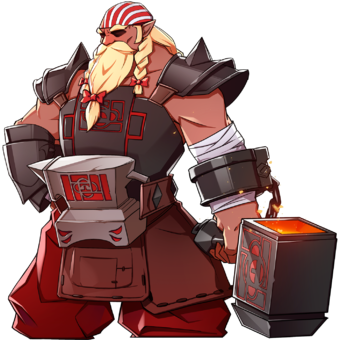 The leader of the Blacksmiths and boss of Ash Covered Village and father of Lanox's blacksmith Steel. After completing the story quest Save the Blacksmith!, [Village] Someone New or [Village] Unfamiliar Meeting, he will appear besides his daughter Steel in town.

Learning about suspicious activity occurring in the Phantasmal Geyser, Sdeing sent some of his workers to investigate the springs. Unfortunately the Steel Blacksmith Leader head nothing from his men since. Little would he know, they had been entranced by the hot springs and became puppets to the Demons. Worried about his men not returning, Sdeing traveled to the Phantasmal Geyser himself to look for his men and figure out what was happening. Instead he, himself would too fall victim to the demons charm potion that had contaminated the waters. Under the Demon's spell, Sdeing worked alongside Ignia and held captive both Gloria and Darkmoon inside the Ash Covered Village.

Wanting to get more clues about what they Steel Blacksmiths planned to do with the Sun and Moon Priestesses, Ignia told the El Search Party to get Sdeing. Successful, Steel, Sdeing's daughter, ran to his side while his entranced body laid there. While there he babbled on about hot springs causing Steel to suspect something was going on in the Phantasmal Geyser since her father his investigated the place not long ago.

With the help of Pesop's antidote to the Demon's charm effect, Sdeing as well as his men were able to be cured however their bodies still remained in a critical state which Pesop suspected could be resolved using Sirena's Crystal Ball. Cured, Sdeing rose up with much gusto and energy. So much so that his body could catch up and he gave himself a headache to his daughter's concern. He thanked the El Search Party for saving him, when he learned that the group planned to go to the Volcanic Ground, he jumped at the opportunity to craft them armor to help them withstand the area's immense heat. Sending the El Search Party off to gather materials in the Geyser Plains, he crafted armor for all of them.

After Ignia had betrayed the El Search Party at the Volcanic Flames Entrance, the Fire Refiner in Lanox began to go out of control once again, with Sdeing doing the best he can to stabilize the machine, he was simple unable to withstand the heat without his tools. Unfortunately, Berserker Armageddon had stolen his Steel Mask which he needs to withstand the Refiner's unbearable heat. With the El Search Party able to retrieve Sdeing's mask back, he successfully was able to stabilize the Refiner temporarily.

With all the El Priestess arriving in Lanox and planning to head out to the Abyssal Ruins in the Distant Ruins, Sdeing jumped at the opportunity to help out and provide more heatproof armor for the Priestesses. He sent the El Search Party off to gather materials and he crafted the suits soon after.

With Lanox back to a stable state and Ifritan back to his former self, Steel wanted to make accessories to offer to the Fire Holy Beast. Steel was full of enthusiasm where making her offering to Ifritan. So, much so that Sdeing was curious and a bit concerned that his daughter should be having such excitement to see the Holy Beast. Steel replied that of course it is, and that she wants to give Ifritan a new head ornament.