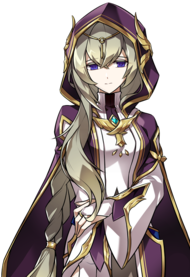 The Moon Priestess during the El Explosion and a spy for Henir's Order.

Misty aided in the infiltration of Dantelion into the House of Ebalon where Harque Ebalon was murdered. At this point, Misty was beginning to feel conflicted about her involvement with Henir's Order but was still going along with their ploy to shatter the El in order to awaken something they believed was slumbering within the El.

After Harque was killed, Misty took the time manipulating device Harque had made and gave it to Noah while she carried the unconscious boy to his room while Dantelion cleaned after the murder of Harque.

After the El Explosion ravaged Elrios, members of Henir's Order went after Noah and injected him with the Sun element as the boy was forced to house the Moon element given to Dantelion in place of Harque. Misty decided that she would betray Henir's Order and take Noah out of their hands and hides the boy in the Temple of Time, sealing him away, abiding by Harque's dying wishing to have Noah survive.

After sealing Noah away, Misty exposes herself as a member of Henir's Order to the El Masters and littered with regrets, decides she must do some part to help the atrocities Henir's Order had just committed. She decided to use her own power to create the Moon El, giving up her life in the process.