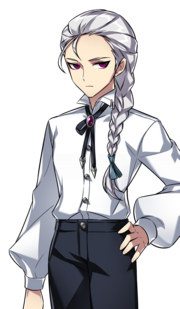 A student of the same military academy as Raven. He is the son of the Felford family who is a reasonably respected noble family in Velder. Not physically built he was a dictionary for tactics. Unlike many of the noble children, he did not discriminate against Raven. He, Seris, and Raven would form a group for the academy's Mock Siege Warfare competition. Their friendship however turned out to be a facade as he only saw Raven and Seris as tools. He framed Raven for a crime worthy of the death sentence. Before Raven was to be executed the Crow Mercenaries stormed the prison and freed Raven, however he and his soldiers hunted them down and slaughter all of them including Raven's fiance Seris only leaving Raven on the brink of death.

An intellectual of a moderately well off noble family, Owen was enrolled in Velder's most prestigious military academy. When the time for the academy's famous Mock Siege Warfare came close, many students paired up together in groups of three in order to participate in the event. Owen found himself paired with two students who were the sons of rich noblemen, Zohan and Fred. The two only chose to include Owen due to him being the only remaining male student of "respectable" nobility. Owen showed discontent with his team members and their arrogant demeanor over Owen showed. Zohan and Fred looked down on Owen as the Felford family had experienced hard times as of late and are only on the edge of their noble status. Soon, the situation became confrontational when Raven stepped in. Owen thanked Raven for the help and asked if we were participating in the competition. Owen stated that he had been interested in Raven's skill ever since the prior training session and urge the two team up. Then Seris arrived offering herself to join their team. While Owen was skeptical of the girl, Raven was willing to allow her to join. Owen was annoyed by the turn of event but was unwilling to stop it due to how soon the Mock Siege Warfare was.

During the actual competition, Owen constructed a game plan in order to defeat the group of Zohan, Fred, and their new member Barton. Owen and Seris hid in the brush while Raven was to hid in the castle's blind spot. Following Owen's plan, Raven found an opportunity and attacked the group while they were off guard. While Raven distracted the boys, Owen and Seris charge the castle. Sneaking by the opposition, Owen and Seris successfully were able to claim the enemy base, winning the battle. Seris overjoyed hugged Owen to his discomfort. Owen helped Raven up and boasted that he had easily planned out how to beat the opposition. The opponent in an uproar about their defeat became confrontational with Seris. However needing to take Raven to the infirmary, Owen and Seris took Raven away, Owen stating that they need to save their energy for their exercises the next day.

Owen placed both Raven and Seris under strict and demanding workout routines in order to keep them in the peak of their abilities. Seris exhausted and on the brink of giving up plead Owen to ease up on the regiment. Owen replied that they shouldn't have teamed up with him if they weren't able to commit with his standards. He assigns the group a special training course to both of their complaint. He promises them that this training won't kill them. Later in the school year Raven and Seris would run into Owen as he was on his way to the library. Carrying numerous books, he had been reading in order to broaden his views to accommodate for any tactic. While in the library, he expresses his gratitude towards his two teammates. Seris interrupted him believing his words were that of friendship, however Owen corrects her saying he is grateful that he were to meet such useful chess pieces. On another encounter with Owen, Seris attempted to surprise him, however this proved futile as Owen's expression did not change in the slightest.

Death of the Crow Mercenaries

Many years later, no longer in need of Raven, Owen would have Raven framed for a crime worthy of death. Upon the eve before Raven was to be executed, Seris and Raven's fellow comrades of the Crow Mercenaries came to free him out of prison. They were successful however, Owen, alongside other Velder soldiers hunted them down. One by one, the Crow Mercenaries fell and even Seris was killed by the hands of Owen. He left Raven mere inches from death before abandoning him in the forest.