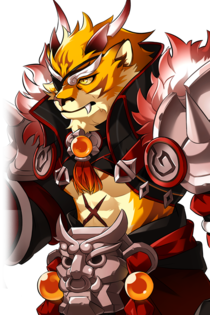 A anthropomorphic tiger like demon. He is stationed at the entrance to the underground prison of Lord's Keep and acts as the commander of the demons inside the keep itself.

Once Laby accidentally discovered the secret door into the Underground Prison, Gunther ambushes them and catches Mao by surprise. Laby calls him a 'meanie' for hurting Mao but her reflects, saying that they're the thieves infiltrating the keep and he's just doing his job to defend it. He is surprised that Mao is still conscious and promises the two of them a painless death for attempting to break into his hall. They fight and Laby manages to defeat the demon commander.

During Laby, Mao, and Calonne's ascent to face off against Nenya, Gunther was among the generals stationed to defend their lord. At this time, Gunther may has been under Nenya's direct control, being among the demons which were injected with Nenya's power.

After Nenya was defeated and the situation deescalated, Gunther appeared to have been gotten under control along with the other demons previously under Nenya's rule.