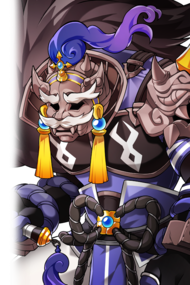 The captain of Nenya's guard. A strong fully armored soldier wielding a mace.

Where Faith Comes Together

When Laby and Mao arrived at the foot of the Lord's Keep, the guard captain was the one to face them off. He initially tries to ward the children away but they persisted, Mao demanding they let her Gramps go. The captain realized the children were after Calonne, the tells them they should quit their efforts, saying that Calonne had personally offended Lord Nenya and is being punished for his crimes. Mao didn't believe the man's claims, the guard captain got annoyed and threatened to send them all to prison. Laby comes into to defend Mao, the captain immediately senses the child's power but brushed her off assuming she was still human. He then assumes Laby was also her to save a family member but she denies that, saying she's here to help Mao and save Calonne. The Guard Captain chastises the girl for her choice to help strangers, much less a criminal. Laby denies her accusations but he tells them they know nothing about what kind of person Calonne really is. Laby and Mao ignore his words and they right. Laby and Mao prove victorious and Guard Captain flees into the keep and shutting the gates on them.

The Guard Captain encounters the two children once again when they try to scale the Keep and reach Nenya. The Guard Captain blocks there way and vows to never let them even see a hair of his lord. He is defeated by the two and Calonne on their way to face Nenya.